Music / Of Mice and Men 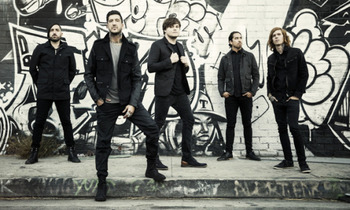 Of Mice & Men is an American metal band from California, and one of the most popular modern metal bands to emerge in the 2010s. Originally founded by Austin Carlile, who was the original vocalist of Attack! Attack!, and Jaxin Hall, a New Zealand expat, in 2009. Initially formed in Columbus, Ohio, the band has since been based in Costa Mesa, California. They've gone through multiple lineup shifts, with Jaxin leaving the same year they released their debut album. Austin left at one point as well, but then returned, only to leave again for good in 2016 due to extreme complications with his health. After multiple lineup shifts, the band eventually came to be as follows:

At the beginning, they were a run-of-the-mill straight-forward Metalcore band. However, by the release of their sophomore album The Flood, they had taken a turn and began to come into their own by increasing their production value and increasing their focus on rhythmic melodies and bass presence — becoming bigger, louder, and more hard-hitting in the process. This proved to be a successful formula as The Flood quickly rose to become the best-selling album released on Rise Records at that time.

After their rise to success, the band seperated with former clean vocalist Shayley Bourget (who would later go on to form the band Dayshell) and welcomed newcomer Aaron Pauley to fill in his shoes. As work began on their highly anticipated follow-up album, the band decided to integrate more Nu Metal elements into their sound, releasing their divisive album Restoring Force in 2014, which peaked at #2 on the Billboard Top 100. This album marked a shift as the band moved in a more commercially viable and accessible direction; despite this, the majority of the songs on the album consisted of downtuned riffs, angsty lyrics, psuedo-rapped vocals, and use of electronica, while keeping recognizable elements from their previous albums.

However, with their fourth album, Cold World the band had made a complete transition into nu metal territory, with the aforementioned elements becoming even more prominent and the metalcore aspects being almost completely removed outside of the occasional use of breakdowns and screaming. This shift in style has been the cause for a great divide within the fanbase, but also opened them up to new fans as well as radio airplay for their songs, something that had alluded them before. With the departure of lead vocalist Austin Carlile in 2017 and the release of their sixth album Defy with Aaron now helming the mantle of frontman, the band seem to be moving back towards the style of Restoring Force with a style not dissimilar to many successful modern metal acts.