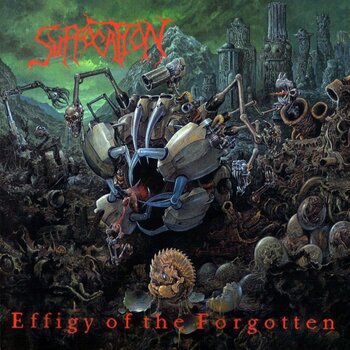 With album covers like this, you know what you're signing up for... 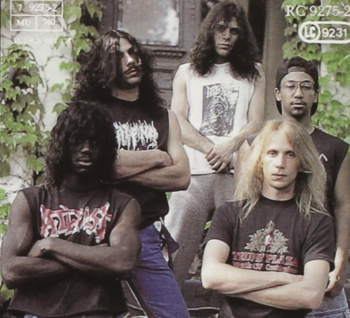 Suffocation is an American brutal-technical death metal band, and quite possibly the Ur-Example of the brutal death genre as a whole. Easily identifiable by their twisted progressions, exceptionally fast tremolo runs, dissonant yet eerily melodic leadwork, and their trademark "Suffo blasts," Suffocation stands as one of the most successful and influential death metal groups in the history of the genre. Let us put it this way: if you ask someone in a modern death metal band about their influences, Suffocation will almost assuredly be at the top of their list.

Formed in 1988 in Long Island, New York by Frank Mullen (vocals), Guy Marchais (rhythm guitar) and Todd German (lead guitar), Josh Barohn (bass), and an unknown drummer, their lineup quickly changed when Mike Smith (drums), Doug Cerrito, and Terrance Hobbs (lead guitar) joined after their own band folded, creating what many believe to be the classic Suffo lineup, as it was the one that recorded Effigy of the Forgotten. Barohn left sometime after and was replaced by Chris Richards, creating a lineup that would record Breeding the Spawn, their troubled sophomore album. Smith then left shortly after and was replaced by Doug Bohn, creating the Pierced from Within lineup. Bohn left shortly after and was in turn replaced by Dave Culross; this lineup went on to record Despise the Sun before breaking up a few months later.

This, of course, was not to last, as Mullen and Hobbs reformed the band in 2003, welcoming back Smith, Barohn, and Marchais on their respective instruments, though Barohn was quickly fired, forcing Hobbs and Smith to perform bass duties for the album. Thankfully, they quickly found Derek Boyer to fill the bass spot in 2004, where he has stayed ever since. This lineup would go on to release multiple albums and tour like madmen, ushering in a new era of success for the band. Things stayed stable until 2012, when Smith quit and Bill Robinson (also of Decrepit Birth fame) had to briefly take Mullen's place on the European tour, with Culross once again taking drum duties. As of February 2013, they have officially released a new album, titled Pinnacle of Bedlam, in addition to announcing that Mullen would have to sit out tour dates here and there due to his need to put his job first (which, of course, was misconstrued as Mullen leaving the band, creating an uproar that annoyed the band to no end); of course, Mullen stayed, and John Gallagher was chosen as his fill-in for the live dates that he could not make. By the looks of things, they still have no intention of stopping any time soon. As of 2014, Culross has left yet again, with Kevin Talley officially taking over on a full-time basis. Live vocal fill-ins are currently being handled by Ricky Myers. A new album is slated for 2016, and Myers will apparently also contribute some vocals in addition to Mullen's own. At some point in 2016, Guy Marchais quietly left; Charlie Errigo (The Merciless Concept) is his replacement. Talley also left at some point between May and July of 2016 and was replaced by Eric Morotti (Killitorous, Blind Witness) on a full-time basis. Lastly, Ricky stepped down from live vocals around the end of the year; while an official announcement was not made, Kevin Muller (also of The Merciless Concept) took over Ricky's duties for 2017 before he stepped down, and Ricky was welcomed back in the following year.

As of November 2018, Frank Mullen has officially left the band entirely. While Ricky Myers is currently doing live vocals, it is still unknown if he will become their new full-time studio and live vocalist.

WELCOME! TO MY TROPE!: