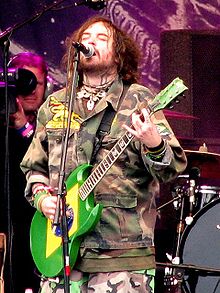 Max Cavalera, the only member who will still be likely to be a member of the band by the time you read this.
Advertisement:

A Heavy Metal band based in Phoenix, Arizona and formed by former Sepultura frontman Max Cavalera, Soulfly began as a genre stew, mixing elements of Groove Metal, Alternative Metal, Nu Metal, Thrash Metal and world music, including Reggae. The band moved away from the initial Nu Metal influence, placing more emphasis on Groove Metal for the albums 3 and Prophecy, but has since returned to Cavalera's Thrash Metal roots.

Partly owing to his reason for leaving Sepultura and forming this band was the death of Cavalera's stepson and best friend, Dana Wells. Other tragedies in Cavalera's life followed; the death of Lynn Strait resulted in Cavalera contributing to the Snot tribute Strait Up, and during the recording of Soulfly's fifth album, Dark Ages, Dimebag Darrell Abbott was shot to death during a concert, and Cavalera's eight-month-old grandson Moses unexpectedly died due to health complications.

The band has gone through numerous line-up changes over the years, with the only consistent member being Max Cavalera. In addition to the line-up changes, a lot of Soulfly's music is collaboration-based, and built to accommodate a great deal of guest appearances.

Tropes for a tropes: