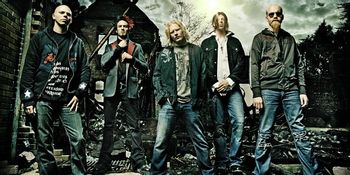 Stone Sour is an American Hard Rock / Alternative Metal band from Des Moines, Iowa, founded in 1992 by then-future Slipknot vocalist Corey Taylor and drummer Joel Ekman. The group disbanded in 1997 after Taylor and guitarist Jim Root joined Slipknot, but reunited in 2002 and have been active ever since.

Although not as famous or successful as Taylor's other band, Stone Sour has received critical and commercial acclaim (including gold certification from the Recording Industry Association of the America and may top 10 album charts across the world), a top 40 hit on the Billboard Hot 100 in "Through Glass" from their sophomore album, Come What(ever) May, and Grammy nominations for Best Metal Performance for "Get Inside" (2003), "Inhale" (2004), and "30/30-150" (2006).

On August 10, 2020, Taylor has announced that the group is on an indefinite hiatus.

I'm looking at you through the tropes: