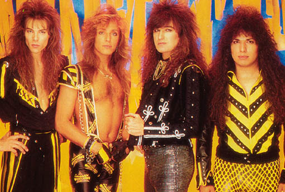 Such nice Christian boys.
To Hell with the devil!
Advertisement:

Stryper is an American Christian Metal band formed in and made popular in The '80s in the Sunset Strip Hair Metal scene. Originally formed as Roxx Regime by brothers Michael Sweet on lead vocals and Robert Sweet on drums and Oz Fox on lead guitar, the band changed its name to "Stryper" when bassist Tim Gaines joined.

Stryper is best known for basically being pioneers in the mainstream popularization of Christian Rock. The band would experience a good run in 1983-1992, including two Gold records and one Platinum record. However, the band would break up in 1992 due to the rise of Grunge, which practically killed off every other hair metal band as well.

The band reformed in 2003 with Tracy Ferrie on bass.

The band's name is a reference to the New King James Version of Isaiah 53:5

, "But he was wounded for our transgressions, he was bruised for our iniquities: the chastisement of our peace was upon him; and with his stripes we are healed."Translation Hebrew "chabbûrâh" is translated as "stripes" in KJV, NKJV, and a few others. Other translations have "wounds", "scourging", or "bruises". "Isaiah 53:5" is often affixed to the band's logo.