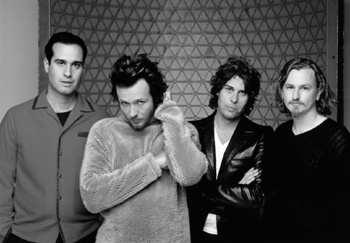 Classic line-up l-r: Robert DeLeo, Scott Weiland, Dean DeLeo, and Eric Kretz.
"...And to you, dead and bloated nation of sleepwalkers, so content to drown in your own rancid apathy that your own minds and the minds of your children are being bought and sold on the auction block by swarthy old hogs — oh, set a place for the auctioneer, he'll be coming to dinner tonight. No need to bother, honey, he'll be coming live via satellite direct, right through our brand new motherfuckin' super mega screen Home Monitor System..."
—Core liner notes
Advertisement:

They were, and still are, The '90s rock version of eclectic music, a band that constantly tried to break from the pack of the era's rock titans to establish their own fan base and sound. Writer Chuck Klosterman once claimed he had never met anyone who claimed to be a passionate Stone Temple Pilots fan, yet he had met numerous people who knew who they were.

At any rate, Stone Temple Pilots's first two albums sold 14 million copies combined, cementing their reputation as rock radio mainstays. Scott Weiland, the Face of the Band for all the wrong reasons, cited Jim Morrison and David Bowie as influences in his own singing. The band's line-up has remained the same throughout its active years, but has split twice, the first time in 1995, when Weiland was arrested and convicted for buying crack cocaine, and in 2002, when Weiland and Dean DeLeo got into a fistfight. They re-formed in 2008, to moderate success. In February 2013, Weiland was fired by the other members for a second time for unexplained reasons. Weiland claimed this was a joke to boost ticket sales; with the release of "Out of Time," featuring Linkin Park vocalist Chester Bennington (and the EP High Rise) this seems not to be the case.

In November 2015, Chester Bennington amicably parted ways with the band due to his commitments with Linkin Park (who was gearing up to record their seventh album, One More Light). However, hopes of a classic reunion vanished nearly a month later when Scott Weiland died at the age of 48 due to an accidental drug overdose; nearly two years later, Bennington, too, died in a suicide by hanging. After months of silence, the band began an online campaign to find a new vocalist. In November 2017, former The X Factor US contestant Jeff Gutt (formerly of Dry Cell) became STP's new lead singer.

The band's studio albums are: