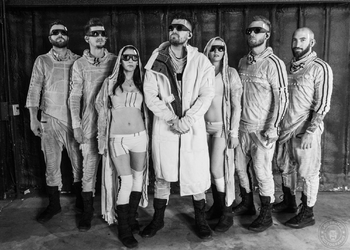 Click here to see the principal members in their space themed attire. 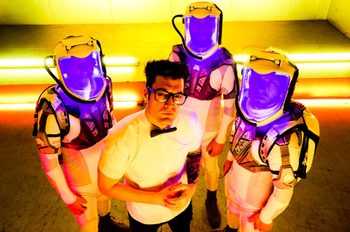 Left to Right: Brock Richards, Dustin Bates, Adam Gilbert, Ron DeChant
Influences:
Advertisement:
Related Acts:
"Take me high and I'll sing
Oh, you make everything okay
We are one and the same
Oh, you take all of the pain away"
— "My Demons"

, stylized as STARSET, is an American Alternative Rock/Metal band founded in 2013 by Dustin Bates.

Originating in Columbus, Ohio, the band came together after Downplay, Dustin's former band, was dropped from their record deal with Epic Records due to a change in the label's president. Realizing that he could combine his passion and educational history of science and engineering with his passion for music, Dustin came together with Ron DeChant (who also started from Downplay) and eventually Brock Richards and Adam Gilbert to formulate what would eventually become Starset.

Of course, not without having been contacted by The Starset Society with a proposal. Dr. Aston Wise had reached out to Dustin with the realization that a band would be a great method of promoting the group's public outreach campaigns after receiving a message from decades in the future. Needless to say, said proposal was considered and eventually accepted with enthusiasm.

The band has found significant mainstream success within the first year of their conception with their first and most popular single "My Demons"; charting before the band eventually signed a deal with Razor & Tie. This would lead into the release of their debut album Transmissions in 2014. The album's release had garnered great reception from reviewers and fans alike, boasting praise due to their unique production alongside their use of orchestral elements. The release of their second album, Vessels, was just as successful, if not even more so with the single "Monster" being a commercial hit.

In the time frame of the releases of Transmissions and Vessels, a novel based on the narrative surrounding the band was released under the name of The PROX Transmissions. A year or so later, the band collaborated with Marvel to release a graphic novel adaptation. It was also around this time that the band had signed a deal with Fearless Records.

After the completion of MNQN, Dustin's more electronic-based solo project, 2019 saw the release of the band's third album DIVISIONS and the resulting mixed reception. "MANIFEST", one of the album's singles, had seen divisive criticisms stating that it was "too heavy" or "too poppy". Two years later, in 2021, HORIZONS was released; described as a sister album to DIVISIONS.

The band had increased from four members to seven over the years with the current additions of Siobhán Cronin, Zuzana Engererova, and Cory Juba to fill in the missing pieces of cinematics and electronics to their live performances. Former touring members include Mariko Muranaka Friend, Nneka Lyn, and Jonathan Kampfe.

A few songs, specifically "Unbecoming" and "Monster" from Vessels alongside "INFECTED" from HORIZONS, saw an additional rise in popularity for the band thanks to their usage and collaboration in regards to the mobile game Arknights. In fact, a lot of their popularity is thanks to the gaming and anime communities due to their uses in fan videos, something the band fully supports if their fanart based music video for "TRIALS"

is anything to go by.

A second novel related to the narrative behind DIVISIONS and HORIZONS has been announced; originally to be released in 2021 but was eventually delayed until further notice.

The Music
The Band & Demonstrations
The Narrative & Music Videos

This article has been approved for release by the Starset Society.

Part of what makes Starset stand out is the use of an overall narrative that makes them more of a concept band. Starting with a transmission from the future with a warning of what may become of mankind, the band expands upon what this future entails within their music videos. Halo's music video, showcasing the efforts of a man looking for his lost love within this future, is no exception.

Part of what makes Starset stand out is the use of an overall narrative that makes them more of a concept band. Starting with a transmission from the future with a warning of what may become of mankind, the band expands upon what this future entails within their music videos. Halo's music video, showcasing the efforts of a man looking for his lost love within this future, is no exception.