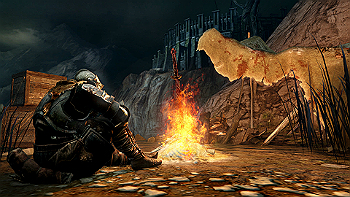 bonfire lit
"There's something magical about having a fire. The crackles and snaps...the warm, flickering light...everything always seems safe and cozy if you're sitting in front of a fire. And if you've got a hot tiger tummy to lie against...well!"
— Calvin, Calvin and Hobbes
Advertisement:

This is where a fireplace or bonfire represents warmth, comfort, companionship, and rest. Might be found at a Good-Guy Bar or a Big Fancy House. Or at an inn. If the comfort is in some way related to the divine, it may also be an example of Sacred Flames. If romance is involved, it may also symbolize Flames of Love.

Additionally can symbolize the relief and warmth of the home, which is a very old motif dating back to Ancient Greece. Historically, most homes had a fire going 24/7, even in summer, as it was their only source of light at night and only means of cooking, and letting the fire go out was too risky.