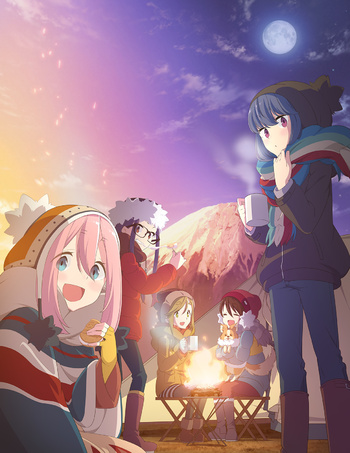 Welcome to the Outdoors Club!
"The stars spread out. Light flows.
Once our hearts are embraced by the gentle scenery…
Let's put out the lights and fall asleep side by side
As we talk about the simplest things."
— "Fuyu Biyori

Rin Shima is fond of camping alone and frequently visits campsites that allow her to take in views of Mount Fuji. She encounters Nadeshiko Kagamihara during one of her camping trips: Nadeshiko had recently moved to the area and longed to see Mount Fuji. To this end, she cycles to find a viewpoint from which she can enjoy Mount Fuji's majesty. After this happenstance encounter, Nadeshiko takes an interest in camping and joins her school's Outdoor Activities Club, where she meets Chiaki Oogaki and Aoi Inuyama, as well as Ena Saitou, Rin's friend. Sometimes camping alone and sometimes camping together, the girls begin sharing in their camping trips and experiences to enjoy some truly unique moments in the wilderness surrounding Mount Fuji.

Laid-Back Camp (Yurucamp△, or ゆるキャン△) is a manga that is authored by Afro, who previously worked on Puella Magi Homura Tamura, and has been serialised in Manga Time Kirara Forward since July 2015. The manga has been licensed in North America by Yen Press. An anime adaptation, produced by C-Station, began airing in January 2018, and episodes are available for watching

at Crunchyroll. Besides the twelve episodes, there are also three OVAs that show the girls' time spent together outside of their camping trips. A shorts series Room Camp (Heya Camp, or へやキャン△) and a Japanese Live-Action Adaptation dorama series both aired in January 2020. A second season aired in January 2021, and an animated movie released in Japan in mid-2022. On October 22, 2022, it was announced that Season 3 of the anime was in production

When camping...
Always mind the campsite and facility rules. Don't forget to take care of fires and your trash!
It gets cold during the winter. Stay warm and be well prepared!
— Outdoor Activities Club