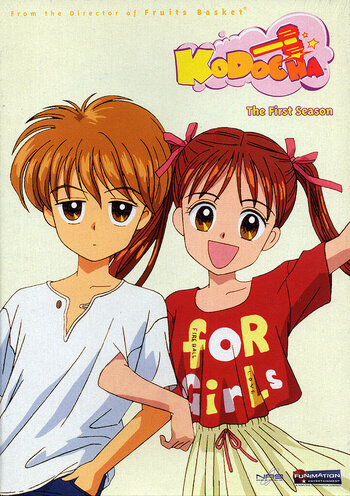 101 episodes later and you'll easily forget that these two were once arch-enemies.
"What's wrong with being cute and bossy?"
— Sana
Advertisement:

Despite her fame and her career, eccentric 11-year-old child actress Sana Kurata lives an almost normal life with her even-more-eccentric author mother, Misako Kurata, and her manager Rei Sagami. She even attends a private school, Jinbou Elementary School, where she has many friends and admirers. But at school, she comes into conflict with the sullen, laconic Akito Hayama, the so-called "boss monkey" of the boys in their classroom.

Akito holds some secret blackmail on two of the teachers, allowing him to get away with a great deal of misbehavior — something which enrages Sana, especially when it disrupts the class. She vows to defeat Akito, and restore peace to the school. After several failures, she succeeds by beating Akito at his own game, but her victory over him is just the beginning of a surprising evolution of her relationship with the quiet, sardonic boy, as she discovers why he is so angry and starts trying to fix it...

Kodocha, contracted from Kodomo no Omocha (こどものおもちゃ, literally meaning "Child's Toy") is a fun, entertaining Shōjo series that mixes large portions of comedy, drama, and romance in equal parts. It was created by Miho Obana and published in Shueisha's Ribon magazine from 1994 to 1998, the same magazine that published Hime-chan no Ribon, Akazukin Chacha, Nurse Angel Ririka SOS (all of which had anime adaptations that along with Genji Tsuushin Agedama preceded Kodocha on TV Tokyo's 6PM Friday timeslot), Marmalade Boy (which the series and two main characters are frequently compared to), and Ultra Maniac. It got adapted into a 30-minute OVA by JC Staff in late 1995 for Ribon's 40th anniversary and was followed by a full television anime series created by Studio Gallop (the producers of all four of the previously stated TV Tokyo series) just a few months later in 1996. The TV series aired 102 episodes through 1998 and was directed by Akitaro Daichi, the director of the anime adaptation of the aforementioned Nurse Angel Ririka SOS, who is better known nowadays for directing series like the 2001 anime adaptation of Fruits Basket (which hilariously, along with its 2019 remake, shares both of the two main character's English voices) and Now and Then, Here and There.

Sana's irrepressible energy and rapid-fire dialogue are second only to Excel of Excel♡Saga for her speed and outrageousness. (In fact, Excel's original North American voice actress, Jessica Calvello, once expressed an interest in voicing Sana in English.) But unlike Excel, Sana is a force to be reckoned with, despite her non-sequiturs and baffling leaps of "logic". Possessing immense empathy and a willingness to help and even defend someone she characterizes as her worst enemy, she plows through troubles and problems with a bold determination and a choice of skills from the Gekidan Komawari Theatre Group she attends. In short, she's sweet and thoughtful but not a complete pushover like Tohru. She's sensitive and vulnerable but not completely fragile like Miki. She's ditzy, scattered-brained, and clueless at times, but not a complete idiot like Excel.

Even long after the franchise has ended, it is still regarded as one of Ribon's flagship classics, occasionally popping up every once in a while in Japan. 2010 saw the release of Deep Clear, a small crossover between this series and Obana's then-running series, Honey Bitter, which featured older versions of Sana, Akito, and most of the Kurata household. In 2015, the franchise was given a bit more focus as a way of celebrating Ribon's 60th anniversary. The manga was given a one-shot revival by Obana herself titled Days Without Anything, which takes place around the time of Sana's twelfth birthday. In the same year, Akitaro Daichi returned to direct a stage play that ran from August 20 through August 30th of that year and is known for having Kotono Mitsuishi (known for Usagi Tsukino and Misato Katsuragi) play the role of Misako.

In 2002, the series made its US debut with the full manga series being licensed to Tokyopop and released under the title of Kodocha: Sana's Stage, alongside its Ribon-relative, Marmalade Boy, but unlike with Marmalade Boy, Tokyopop wasn't responsible for the distributing the anime adaptation. In 2005, Funimation dubbed the first half of the anime series in English and began to release licensed DVDs of it in North America simply under its abbreviated title, "Kodocha". The original opening credits from the first season were replaced with the second opening (which normally played from episode 45 and onward) because of legal pressures exerted by Johnny & Associates, the management behind TOKIO, the band who recorded the opening "7 O'Clock News". Even the cameo of one of the members of the band in the first episode was edited in both the English and Japanese tracks to keep any mention of the group out of the North American release. While the dub at least ended on a good note, the second season was never dubbed or even released in the US presumably due to licensing contracts and low sales of the series, and as of February 2012, Funimation lost the license of the series.

However in 2020, around the time the series saw a Blu-Ray release in Japan, Discotek Medianote who had previously rescued the anime adaptations of the above-mentioned Marmalade Boy and Ultra Maniac announced that they rescued the anime for a US release on SD Blu-ray

, and this time all 102 episodes, albeit a subbed second season, will be released and to make things even sweeter, all the music rights have been clearednote This is due to a change over in management at Johnny's & Associates as the agency is now managed by Johnny Kitagawa's niece, Julie Keiko Fujishima after Johnny himself passed away in 2019. The first season was re-released in late November of 2021, not too far from the anime's 25th anniversary, with the second season slated for a 2023 release.

Has nothing to do with the character of Omochao, nor is there any relation to Kodomo no Kodomo, Kodomo no Jikan, or Lotte no Omocha.

And now, onto the examples:

Babbit: Phew! Now that's a lot of tropes to read through!