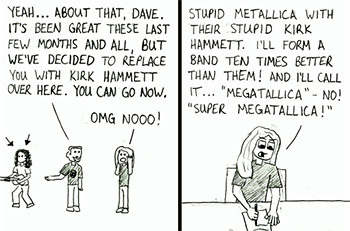 A character or characters are disgruntled with the way a certain organization or group is run, and (usually after getting kicked out) decide that they will not just start their own, but it'll be better than the original. Generally either ends with the new organization actually being better or, alternately, failing miserably as An Aesop about how some things are harder than they look. However it ends up, this trope is what happens when someone is told Let's See YOU Do Better! and actually takes on the challenge.

The Moral Substitute is a Sub-Trope wherein the disgruntlement is (mainly) values-based.

Starting your own with friends or allies (however loose) will often result in an example of We ARE Struggling Together.

Oh, no room for me in the trope sections, huh? Screw You Guys! I'm gonna go start my own website about tropes! With blackjack! And hookers! In fact, forget the website and the blackjack! ... Ahh, screw the whole thing.
Feedback

After Spanky tells her the treehouse is for the He-Man Woman Haters Club, Darla threatens to start a She-Woman Man Haters Club.

After Spanky tells her the treehouse is for the He-Man Woman Haters Club, Darla threatens to start a She-Woman Man Haters Club.