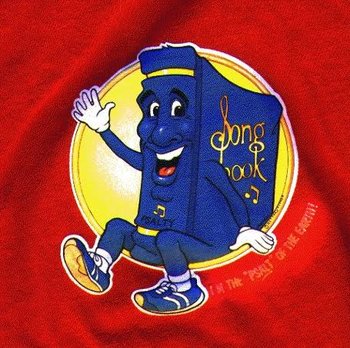 Psalty the Singing Songbook.
In the 1970s, Christian praise leaders Debbie Kerner and Ernie Rettino were making albums of praise music, and decided to try putting an album together specifically for kids. They made it appealing by mixing in some cartoonish sounds with children's church music, creating a cartoon mascot called Psalty the Singing Songbook, and by giving each album a narrative.
Advertisement:

In 1997, Debbie Kerner and Ernie Rettino attempted to introduce Psalty to the international market with a Dutch version of Funtastic Praise Party. The Dutch version

was shown at "The Blessing Den Haag Church" (aka "Capitol Evangelie Centrum" note  "Capitol Gospel Center" in English ) in Hague, Netherlands. This version is very similar to the original American version with the only differences is changing the characters names (except Psalty,) and Psalty, Charity, and Risky Rat played by local Dutch actors, different puppets, and a lion and lamb appearing as Psalty invites the audience on a pretend camping trip.