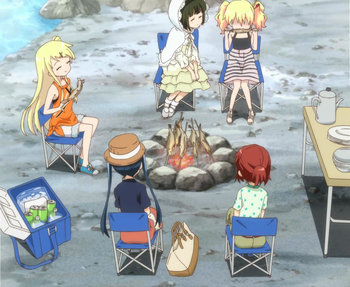 Spending time outdoors, walking, breathing fresh air, making food on a portable stove, sleeping under the sky—all in order to relax or have fun. Camping is interpreted widely here. Sleeping outdoors definitely counts, even in a garden, but a full-day hike also qualifies, especially if one prepares food and cooks outdoors. Tents aren't required either, boats can also qualify, or going to austere cabins.

In fiction, it can be used to provide an easy change of tempo or environment, and it also gives a strong backdrop for interpersonal dynamics, as the characters have to work together more closely in an often unfamiliar way. The goal of the characters to have fun or relax also makes it easy to set up and knock down expectations.

A Camping Episode is used to keep the story and the characters fresh by changing the circumstances for the characters, and having an excuse for them to grow. Other types of isolated stories within a work like single issues in a comic or a movie sequel that has the characters leave their usual setting to go camping would also be Camping Episodes. Because of the nature of this trope, you'll generally only see a work use a Camping Episode once or twice.

If just about everything goes wrong, it is a Horrible Camping Trip. See also Road Trip Plot, Vacation Episode, Beach Episode. A common way to set up a Macho Disaster Expedition or Lots of Luggage (the latter of which usually shows up in Fancy Camping).

Has nothing to do with "Camp" (the exaggerated theatrical style) but you can have a campy camping episode.

SpongeBob and Patrick camp out in the front yard, and even Squidward joins in.

SpongeBob and Patrick camp out in the front yard, and even Squidward joins in.