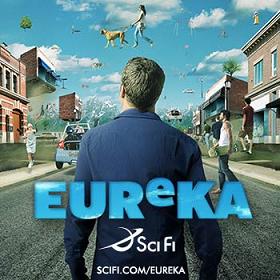 A one-hour show on Syfy about the eponymous town and the trouble its genius residents get into.

Eureka is a quiet, small town in Oregon filled with scientists working on the most advanced technology in the world. All this is highly top secret and under the purview of the Department of Defense. And into this quirky, bizarre town comes Jack Carter, former U.S. Marshal and newly appointed sheriff of Eureka. Much of the show's humor comes from Carter attempting to deal with the everyday use of futuristic tech (including the AI that runs his house), and the For Science! mentality of the town's population and the disasters this frequently leads to. A good percentage of the disasters stem from the work of the scientists at Global Dynamics, the research and development company in town. It has had at least three different heads of company throughout the show's run, which should tell you what kind of a place it is.

Important characters include Carter's rebellious teenage daughter, Zoe, who turned out to be a lot smarter than you might expect at first glance, and Deputy Jo Lupo, likewise. For much of the show's run, Carter is involved in a UST laden Love Triangle with Allison Blake and Nathan Stark (her ex-husband and one of the aforementioned heads of Global Dynamics— Allison takes over after Kim's death leads to Stark's demotion). There's also Henry, one of the brilliant minds in town and Jack's best friend; Fargo, who designed Jack's Smart House (S.A.R.A.H., who is a character in her own right); and Taggart, who is what happens when you feed Steve Irwin Paranoia Fuel and set him loose in a town full of crazies.

Driven by a "Mystery of the Week" science fiction element, the show has featured a different Story Arc stretching loosely over each season. The strong science fiction plots are complemented by the ignorance of Sheriff Carter. In some sense it is like a twisted version of The Andy Griffith Show, where Opie is a felonious teenage daughter, Gomer Pyle is a brilliant ex-NASA engineer and Barney Fife is a soldier (later, Barney is a Ridiculously Human Robot).

Known in the UK as A Town Called Eureka to avoid confusion with a science programme. Not to be confused with a story about Sky Surfing Giant Mecha called Eureka Seven, or the Nickelodeon show about medieval puppets.

During season 4, other shows on the Syfy Network (namely, Warehouse 13 and Alphas) were eventually established as being sort of part of the same fictional universe as Eureka (the "Syfy-verse").

On August 8th, 2011 it was announced that the show would be ending after five seasons. The series ended on July 16 2012.