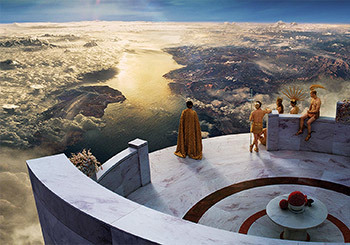 Where there are demons, there are usually their opposing numbers, assuming the world isn't completely crapsack, and occasionally they will have a physical base on Earth. Much rarer than its malevolent counterpart, as heaven doesn't usually come up as often as hell in stories, due to not being quite as obvious a target for those pesky adventurers. (Though considering how much fun heaven can be to fight, this is a shame.)

Unless humans have found a way of shifting planes, this is a requirement for a Rage Against the Heavens plot.