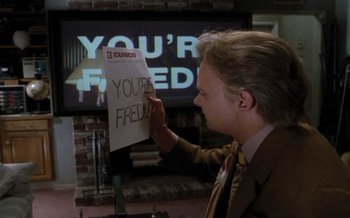 At least there's no ambiguity.
A sacking, the book says, is one of the most harrowing and stressful events you may ever experience — Jones assumes "you" means the person being sacked until he realizes it's talking about the manager. According to the book, sackings can be highly destabilizing: workers stop thinking about doing their jobs and start thinking about whether they'll still have them. [...] What Jones doesn't find in the book — and he doesn't notice this at first; he has to flick back and forth — is any mention of the retrenched employees. [...] It's almost as if once they are sacked, they cease to exist.
— Jones reading the Omega Management System, Company by Max Barry
Advertisement:

Being fired is one of the most traumatic experiences a person can go through. Not only do they lose their livelihood, their circle of work friends, and their routine, but they have to deal with the fact that somebody looked them in the eye and said "You're not good enough". Or maybe even worse: Didn't look them in the eye, and just sent a dismissal letter or e-mail as though they weren't worth the personal appearance.

But it's not always easy on the person doing the firing, either. They need to be the one who looks the other person in the eye and says "You're not good enough", and then they need to live with the guilt afterwards. How do you just go back to your 9-to-5 job after you made the calculated decision that somebody wasn't worth keeping around?

Whether you're the fire-er or the fire-ee, it's a serious event, with long-lasting repercussions.

Stories that focus on the person being fired can approach it in multiple different ways. If the character knows it's coming, they can play up the fear and dread as the deadline approaches. In a comedy this can be the impetus for a Zany Scheme to try and save their job, or perhaps a form of revenge against the company instead. If it is a surprise, it can serve as a Cruel Twist Ending to shock and dismay the audience. If the character is a main character in an ongoing story they will often have their job again the next week, but not always. Sometimes this leads to an entirely new story or arc. Occasionally the firing will be seen as a good thing, giving the character the impetus to pursue the dreams that they had been putting off.

Stories which focus on the person performing the firing don't have as much leeway, and instead have one predominant feature: Forcing the character to shoulder the responsibility of firing somebody. Normally this will be their very first firing, and will come after a recent promotion to highlight the burdens that come with the perks of management. It might also be somebody they were friends with, or had previously hired, to add emotional complexity. Normally they want desperately to be a Benevolent Boss, only to ultimately find that there is no way around the issue in the cut-and-dry world of dollars and cents.

If the person doing the firing is a supervillain or criminal of some kind, this might overlap with You Have Failed Me or You Have Outlived Your Usefulness. Related to Kicked Upstairs and Reassigned to Antarctica, where they try to get rid of somebody without firing them.

Keep in mind that this is not just for any incident where a person is fired in a story, but is about the way stories explore the lead-up and aftereffects on the people involved. Not related to Out of Job, into the Plot, which is when a person fired at the start of a work (Or even before it) leads to an unconnected main plot.

Ian McGregor, manager of the National Coal Board, tries his hand at the restaurant business.

Ian McGregor, manager of the National Coal Board, tries his hand at the restaurant business.