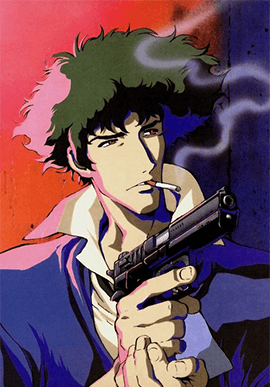 Remember kids: Smoke, and you too can be this badass.
"There were guns in Out of the Past, but the real hostility came when Robert Mitchum and Kirk Douglas smoked at each other."
— Roger Ebert on 200 Cigarettes
Advertisement:

If you're badass, you smoke. (Unfiltered, you sissy!)

For some reason, smoking is used as a shorthand in fiction to say that someone is a badass. It probably has its roots in Fifties rebel flicks, or '40s Film Noir, or maybe the somewhat deeper idea that someone who cares nothing about their health will willingly expose themselves to pain on a regular basis, or maybe the play of smoke on the screen around a character in slow-mo is just that damn cool — but whatever it is, there's no denying that nine times out of ten a fictional smoker is a badass. No childlike or upbeat characters smoke. The smoker is the Anti-Hero, the Badass Normal, or the Deadpan Snarker, whereas the non-smoker is the Genki Girl, Messianic Archetype, the Kid Hero.

And you can forget about the millions of ways cigarettes can kill you or make your life miserable. Fictitious smokers are hardly ever affected by so much as a smoker's cough, let alone shortness of breath, lung cancer, gum disease, or heart disease. No-one else minds, either — the only people who complain are going to be the naggy Side Kick, joy-killing bureaucrat or the irritating little brat who tags along outside the lower boundary of the Competence Zone, and it gives the hero a good chance to sarcastically brush them off and show how cool and viciously witty they are.

There may be a pragmatic element to this trope, given the predicted lifespans of most people in badass professions. The prospect of dying of lung cancer in twenty years loses much of its sting when there's a real chance of dying of high-velocity lead poisoning tomorrow. This is one of the reasons smoking is still popular in high-risk professions, like the military, or convenience store cashiers. Not to mention that nicotine has a (short-term)note  Although the long-term stress caused by addiction and other nasties from nicotine

will cause the smoker to pay dearly for it. Of course, if there is a good chance you'll be dead soon from your profession, this is probably not a high concern for you. positive effect on anxiety and stress; two major issues that come up in high-risk professions.

While this trope is dying away as smoking becomes less socially acceptable, it's notable enough in older media. Interestingly, shows aimed at younger audiences don't seem allowed to smoke. Since smoking in Japan hardly even raises an eyebrow (that culture has smoking strongly associated with hard work, among other things), this trope is also common in anime and manga.

In older media from before the Surgeon General's report on tobacco use, smoking conveyed maturity, experience, and social acceptability. The "Stop Having Fun" Guys character in an old movie or TV show will almost always be a non-smoker, as will be the male Neat Freak and Ambiguously Gay and the female Maiden Aunt, Purity Sue, and Straw Feminist. Basically, the non-smoker was thought to be no fun at all, and (unless they're a youngish Purity Sue) socially transgressive in some way. The message was that most non-smokers were weirdos you didn't want to know, which might be part of the reason why people of that generation refused to believe the Surgeon General for so long. It seems like a classic case of Do Not Do This Cool Thing.

As a side note, much like Drink-Based Characterization, the actual forms of tobacco smoked seem to fall into tropes of their own. Cigarettes are smoked by the typical cool badasses. Pipes are smoked by wizened ancient old wizards and martial artists. Cigars, if they're not being smoked by Da Chief or a soldier, are typically the favored form of tobacco for gangsters and Corrupt Corporate Executives.

At one time pipes looked more "intellectual" than cigarettes, so a professor or scientist, even quite a young one, would smoke a pipe, while policemen, soldiers and other men of action smoked cigarettes. Nowadays pipes usually denote old codgers or homages to Sherlock Holmes.note Pipe smoking enjoyed a mild revival among nicotine-addicted millennials towards the end of the 2010s, partly because of the hipster appeal but also because cash-strapped millennials are attracted to the fact that it's by some way the cheapest form of smoking: inexpensive pipes are readily available, and pipe smoking is so fiddly that pipe smokers tend to smoke much less tobacco per session than cigarette or cigar smokers.

Smoking fetish fiction has its own conventions, subdivided down to brand. Generally speaking, housewives and other prole heroines smoke Virginia Slims or Marlboro Lights. Career women smoke Mores. Black women smoke cheap cigars, such as Swisher Sweets, Backwoods or Black and Milds (this is Truth in Television); "street smart" white women do the same. Older women smoke unfiltereds, usually Pall Malls or Camels. Black men go for Kools. The Vamp uses a holder, which is often campily long, or smokes a cigar for the Freudian connotations. Goths, Byronic Romantics and bohemian types wouldn't be caught dead smoking anything but clove cigarettes. People in the "ghetto" go for Newport menthols. The Troubled, but Cute will inevitably smoke Lucky Strike.