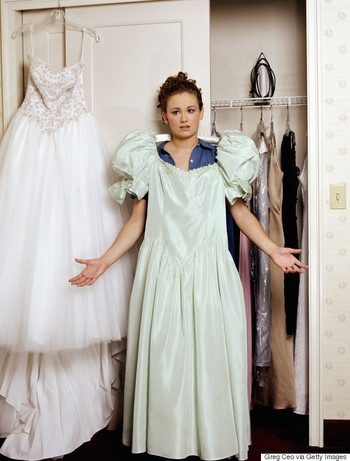 I'm expected to wear this why exactly?
You set my heart on fire,
On that day when I didn't know if you were gay,
So please say yes,
You don't have to wear a dress!
—Syd in their promposal song to butch girlfriend Elena, One Day at a Time (2017)

In real life, some women don't like dresses or skirts for a variety of reasons. They don't think they look good in them, they don't accentuate their figures the right way, they don't like the image they give off, long skirts and dresses are very impractical for running around (though short skirts can be very practical for active women, with some miniskirts even being explicitly designed for sportswear), they can be harder to sit down in, they're not warm enough for the climate, they're too frilly, they're too girly, etc. Sometimes, they just don't like dresses with no specific reason behind it. They're just not their style.

In fiction, however, mainly two types of characters hate dresses: tomboys or Butch Lesbians who dislike "girly" stuff and Action Girls who find their looseness too cumbersome. There's often an overlap between them. Sometimes the character's belief that Real Women Don't Wear Dresses is behind their disdain for dresses and skirts. Other times they're just not used to loose-fitting, frilly garments due to their normal rough-and-tumble attitude

A girl who doesn't like dresses or skirts will inevitably be put into one eventually. She will look nice in it, however, she will not enjoy the experience (at least not explicitly) and will often be insecure of herself.

Contrast the male Crossdresser, who challenges the same gender norms from the other direction and likes wearing dresses and skirts, but often isn't allowed to, and/or criticized for it if he does. Putting both characters through a "Freaky Friday" Flip together may have funny results.

See also Of Corset Hurts (for the common depiction in historical fiction of corsets as instruments of misogynist torture).