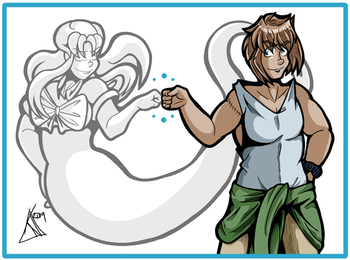 ) is the current primary webcomic of NJ Huff, creator of Emergency Exit.

Undead Friend follows the story of Orrick, a spikey-haired high-school student who has just met a cute new girl: Mahalah is smart, friendly, and clever...unfortunately she's also dead and has been haunting Orrick's school for years. She has the chance to make contact with one living person and she’s chosen Orrick as her new friend. Unfortunately there's more to the deal than either of them know and they both get pulled into a deadly game with the unlikely name of Undead Friend.

Undead Friend originally ran from 2005 to 2007 simultaneously with Emergency Exit but was then put on hiatus so NJ could focus on EE and school, leaving it incomplete at chapter 10 and over 300 pages posted (the old comics are available to read in the archives

In 2011 NJ suffered a serious back/neck injury that caused her chronic pain that kept her from working on comics for 7 years. In 2018 she made a complete recovery and returned to webcomics but decided to bring back UF instead of EE (but claims she will eventually revive EE in some way). UF officially re-launched on July 25th, 2018 (same day as NJ's birthday) with Chapter 01 completed and started updating new pages every MWF. After a couple months the update schedule got changed to a monthly format. Then the comic updated with a full completed chapter on the 1st of every month, with early access to the next chapter given to Patreon supporters. Starting on May 31st, 2019 the comic switched back to single page updates Monday-Friday.

For the new version of Undead Friend NJ is working with her husband, Orion Gates who originally created Beyond Reality. Orion is noted as being a co-author and editor.

Undead Friend is a story- and character-driven comic, done in a standard comic page layout and is in black and white with occasional colored pages. It updates with new pages five days a week Monday-Friday and has over 300 pages in its archive. It is a mix of Romance, Comedy and Action.