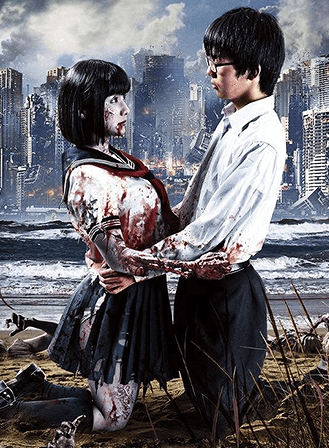 'Til death do us part' sort of loses all meaning now...
"My girlfriend is smart, beautiful, and totally in love with me. The only problem is that she really enjoys the taste of human blood. Should I be at all concerned about this?"
— Ask That Guy, "Episode 7"
Advertisement:

The Undead are usually scary, but sometimes they're sexy or even cute as well, and sometimes, a guy or a gal falls in love with one. A little bit of stalking-the-night and feasting-off-the-bodies-of-the-living is no impediment to true romance, after all. When Boy Meets Ghoul, or girl meets vampire, or, in general, when a normal person meets an attractive member of the opposite, uh, side of the border between life and death, love can flourish. They say that love conquers all. Maybe it can even conquer undeath?

Until recently, this occurred more often with vampires or ghosts than with any other form of undead creature; however, mummies and zombies are growing in popularity nowadays. Romance with actual ghouls is fairly rare, but the pun was too good for us to resist.

If the love comes first and the (un)death comes later, that's Resurrected Romance.

Contrast with Robosexual, Man of Steel, Woman of Kleenex and Did You Just Romance Cthulhu?.