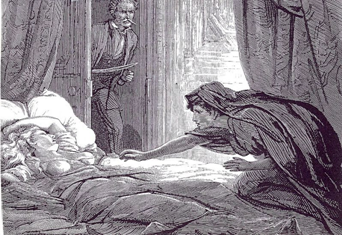 "Love will have its sacrifices. No sacrifice without blood."
— Carmilla, chapter VI
Advertisement:

Written and published in 1872 by Irish author Joseph Sheridan Le Fanu, this novella mixes authentic Middle- and Eastern European folklore and Gothic literature. It formed the last story of five in the collection In a Glass Darkly, but it has since often been published separately.

Its heroine and narrator is Laura, an English girl who lives with her father and a few servants in a secluded Austrian schloss.note German for a castle or château. Laura is suffering deeply from loneliness, when a strange incident results in a mysterious girl — the beautiful Carmilla — becoming a guest at the schloss. In Carmilla, Laura finally finds the friend she has been looking for, but she is puzzled by Carmilla’s odd habits and her unwillingness to reveal her true identity.

Soon, an unknown disease that only kills young women strikes the countryside, and Laura herself eventually falls ill as well — when by chance, a friend of the family shows up with a tale that leads to a horrifying revelation.

Carmilla is a milestone in Vampire Fiction: It includes a Haunted Castle, the Überwald (actually Styria in Austria), and tells you that Your Vampires Suck (when Laura compares Carmilla to "fictitious" vampires). Subtly, the striking beauty of the eponymous character suggests that Vampires Are Sex Gods. Yes, all these tropes are Older Than Radio.

Most notably though, the novella is the Trope Maker for the Lesbian Vampire. Carmilla’s unspeakable secret echoes the taboo status of homosexuality in Victorian society, and Carmilla’s unholy appetite also evokes a different kind of forbidden desire. And while the story never ever talks about sex, the subtext is so obvious that Carmilla (or rather, Le Fanu) can discuss homosexuality without actually naming it.

This theme was prefigured and quite possibly inspired by Samuel Taylor Coleridge's poem, Christabel. Scholars have noticed the similarities between Christabel and Laura, and also those between Coleridge's mysterious Geraldine and Le Fanu's Carmilla.

The story has long been in the public domain, so feel free to check out the text

It has recently been adapted into an ongoing modern day Vlog Series similar to The Lizzie Bennet Diaries, featuring Laura and Carmilla as college roommates,

the trope page for which can be found here. Another (loose) adaptation is the book and later film The Moth Diaries, to the point the originally story is directly referenced. A film version of the story, here set during the late 1700s, came out in 2019.