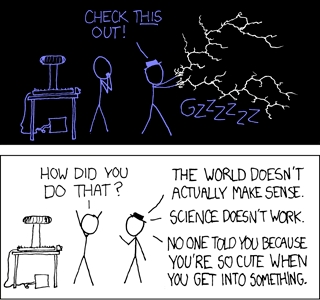 For scientists this can be the hardest thing about dreams.

"Do not believe what the scientists tell you. The natural history we know is a lie, a falsehood sold to us by wicked old men who would make the world a dull gray prison and protect us from the dangers inherent to freedom. They would have you believe our planet to be a lonely starship, hurtling through the void of space, barren of magic and in need of a stern hand upon the rudder."
— Exalted 1st edition rulebook
Advertisement:

The extreme end and/or reason for Science Is Bad. May overlap by also presenting scientists as bad and wrong. Science is badong.

In this trope, science is simply wrong: it lacks objectivity and does not describe anything "real". There are a number of general forms in which the error of science is considered:

This is not the same kind of wrong as that in the Scale of Scientific Sins: there it's ethically wrong.

Strongly associated with the Romanticist side of Romanticism Versus Enlightenment, along with Science Is Bad. See also Mother Nature, Father Science, Aesoptinum, Science Marches On and What We Now Know to Be True. A common feature of The Masquerade. When overlapping with Science Is Bad, can be associated with Dumb Is Good. If Science Is Useless, this may be because it's wrong. May be presented through a Straw Vulcan.

This can be hard to reconcile with violations of Magic A Is Magic A. There really shouldn't be any reason a system of observation can't find a pattern with magic unless that magic is specifically changing its behavior upon being examined. Even when this is the case; it often seems the only time magic changes its rules is to invoke this trope.

This can also contradict one of the most prevalent sub-tropes of Science Is Bad, namely, New Technology is Evil. After all, evil technology presumably works, which means that at least that science wasn't (empirically) wrong. One possible way to have both tropes is Aesoptinium; because science is wrong, the technology became evil in a way the scientists didn't intend, though we can still say Science Is Bad because the scientists should have known better than to make something with Potential Applications.

Often any Agent Scully questioning the magic isn't really using science but rather a belief in machines. A good scientist wouldn't only complain that something isn't possible upon discovering something that contradicts previous knowledge. They'd explore the implications, test why the result is happening, see if it can be replicated, and list the various causes and effects that can be observed related to the event — although, admittedly, many would be quick to dismiss any claims of the supernatural out of hand, because the supernatural is kind of by definition stuff that shouldn't work under the laws of nature. TL;DR: If Science is Wrong is proven, it becomes a scientific worldview.

Obviously, good scientists are rare where this trope is invoked.