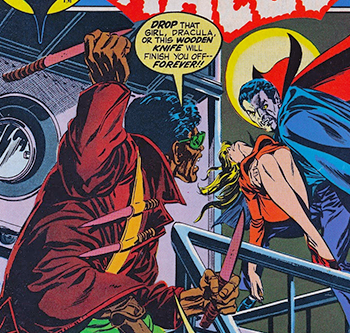 Someone who hunts vampires. May be a Hunter of His Own Kind (vampire hunting seems to be a common profession for Dhampyr and the Friendly Neighborhood Vampire who feels compelled to protect humans from his less charitable kin). If not all vampires are evil, he may end up hunting every last one down anyway, due to a misplaced sense of justice or the loss of a loved one to a vampire attack. And often sublimated self-loathing. Sometimes his single-minded zeal for the hunt ends up making him just as bad as or even worse than the fiends he hunts.

Expect to see vampires' traditional weaknesses — wooden stakes, Holy Water, garlic, crosses or other religious symbols, etc. — well-represented in this guy's armory. Also expect to see a strange compulsion to go hunting after dark despite the obvious advantages of daylight.

See Hunter of Monsters for a hunter whose chosen quarry extends to other supernatural creatures beyond the blood-sucking variety. The vampire hunter may overlap with the former trope, however, if he is called upon to slay things besides vampires.

The Marcus brothers gets a chance to show us what they've got against a bunch of low ranked vampire spawn.

The Marcus brothers gets a chance to show us what they've got against a bunch of low ranked vampire spawn.