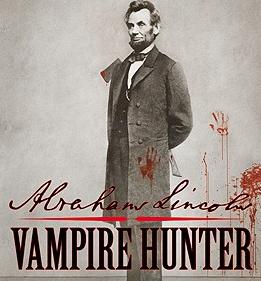 Abe Lincoln. He hunts vampires.
"I hereby resolve to kill every vampire in America."
Advertisement:

A historical fantasy book by Seth Grahame-Smith, author of Pride and Prejudice and Zombies.

Young Abraham Lincoln sees his mother die when he is just a boy. He soon discovers that a vampire is responsible. Swearing vengeance, Lincoln goes on to moonlight as a vampire hunter with the help of ethical vampire Henry Sturges. Along the way, a large number of historical figures from Lincoln's era are shown to be either vampires, vampire sympathizers, or vampire hunters.

Other than the added vampires, the book stays true to the events of Lincoln's life. Most of the time.

A movie adaptation was released on June 22, 2012, directed by Timur Bekmambetov, produced by Tim Burton, and starring Benjamin Walker in the title role. Seth Grahame-Smith adapted the screenplay himself.