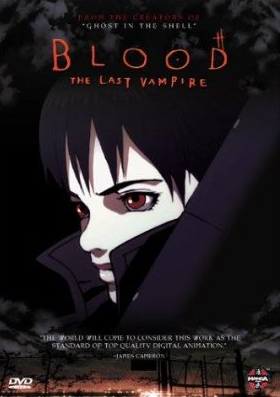 Blood: The Last Vampire (2000) is an anime film produced by Production I.G and Aniplex and directed by Hiroyuki Kitakubo. A single-volume manga sequel, Blood: The Last Vampire 2000 written by Benkyo Tamaoki, was published in Japan in 2001 by Kadokawa Shoten, and in English by Viz Media in November 2002 with the title slightly modified to Blood: The Last Vampire 2002. Three Japanese light novel adaptations have also been released for the series, along with a video game (which is the 6th game of the interactive adventure Yarudora series). A Live-Action Adaptation of the film with the same title was released in May 2009.

The story is set in the American Yokota Air Base located in post-World War II Japan on Halloween 1966, a few months before the beginning of the Vietnam War. Its main protagonist is a girl named Saya, who hunts blood-drinking bat-like creatures called chiropterans for a secret organization known as the Red Shield.

All adaptations Contains Examples of:

The Manga Contains Examples of:

The 2009 movie Contains Examples of: