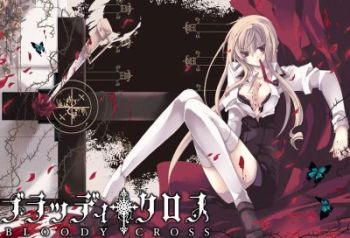 Bloody Cross is a manga by Shiwo Komeyama, which ran in Monthly Shonen Gangan from 2009 to 2015.

The story focuses on a half angel half vampire named Tsukimiya who is seeking a way to free herself from her half-blood curse, which will kill her if it isn't removed. While searching for a way to remove the curse, she is caught up in a "Holy War" among "God Candidates" who are competing against one another to gather "God's Inheritences", artifacts that contain God's power and can turn the candidate who gathers them into the new God.