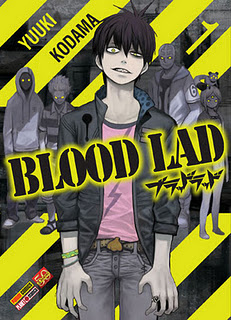 Blood Lad is a seinen manga by Yuuki Kodama, which ran in Young Ace from 2009 to 2016 and was compiled into 17 volumes. The manga tends to subvert or parody some action/battle manga tropes.
Advertisement:

Staz Charlie Blood, Otaku vampire and ruler of a district in East Demon World, falls in love (and bloodlust) at first sight with Fuyumi Yanagi, a Japanese schoolgirl who accidentally enters Hell. Unfortunately for the smitten Staz, she is killed while he is fighting an intruder on his territory. Her ghost remains in Hell and Staz embarks on a quest to resurrect her by implanting her spirit and bones in new flesh.

An anime adaptation debuted in the Summer 2013 Anime season. Yen Press licensed the manga in English, while Viz Media has the anime licensed in North America.

Not to be confused with Aqua Lad.