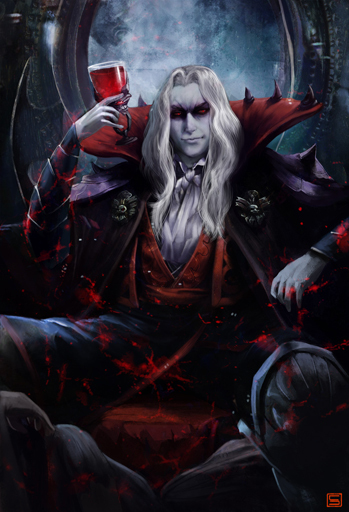 "The luxury with which this Vorador surrounded himself was impressive. His wealth would shame the haughty nobles of my former court. That this vulgar display of fortune remained undisturbed was a testament of fear's dominion over greed."
— Kain, about Vorador living in a very luxurious mansion, Blood Omen: Legacy of Kain
Advertisement:

In most vampire fiction, vampires tend to be filthy rich or at least comfortably loaded. It's presumed that over the years they've managed to save/squirrel away money so that they can have a comfortable lifestyle, plenty of security so nobody comes in and stakes them in their sleep, and a fabulous wardrobe. Some certainly look like the Rich Idiot With No Day Job, others may be Non-Idle Rich and manage to be financially enterprising. Generally justified in that the vamp is hundreds of years old, and thus has had plenty of time to accrue his wealth (and invest it via The Slow Path version of a Compound Interest Time Travel Gambit). Being technically dead also saves several bills, as there's no need to buy food, water, health insurance, you get the idea.

Tropologically, it's probably to do with vampires being decadent aristocrats going back to Count Dracula. Both tropes play on the symbolic connection between literal blood-sucking and the parasitic way of life of a real-life idle class which does not support itself by its own efforts, but by exploiting other people.

Vampires in more recent times (such as The New '10s) are more likely to play with this trope. They might be Impoverished Patricians struggling to adapt to the modern age (again paralleling history) and so Reduced To Rat Burgers. On the other hand, they could be an otherwise Average Joe working nights at the Quik-E-Mart in order to pay for a dark enough apartment to sleep in.