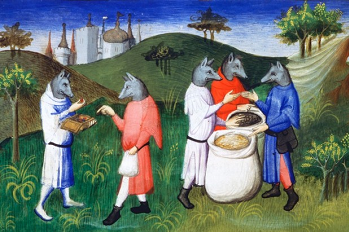 The Lupineproletariat.note as a play on Lumpenproletariat

Unlike vampires, who tend to be portrayed as well-off, werewolves are often depicted in fiction as being impoverished, or at the very least working-class, especially if they appear alongside vampires. They frequently live in shabby houses (occasionally displaying signs of damage inflicted by their occupants when they've unleashed their bestial forms) and have limited wardrobes (which is sometimes used as an excuse for them go round shirtless, particularly in modern media).

Sometimes, this is justified as werewolves finding it difficult to hold down a job due to the nature of their condition, or struggling to advance economically due to discrimination. Occasionally, they are contrasted against vampires in a fantastical case of Slobs vs. Snobs, due to werewolves being considered more animal-like and uncivilized, while vampires tend to be associated more with wealth and sophistication.

Although this trope is more commonly found in recent media, there are a few stories featuring poverty-stricken werewolves making the most of their lycanthropy to get a slice of the good life dating back to the 1800s, at the least, likely making this trope Older Than Television.

Compare and contrast with Vampires Are Rich. See also Our Werewolves Are Different. May overlap with Fantastic Underclass.