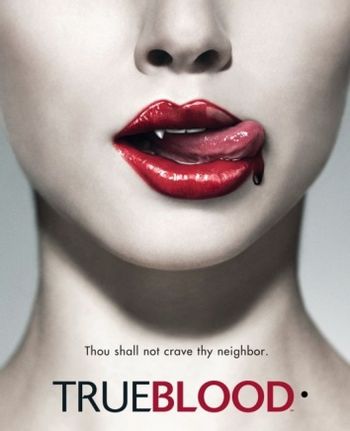 True Blood is a Supernatural Soap Opera produced by HBO and created by Alan Ball. It is set in an alternative universe where vampires not only exist, but have recently publicized themselves through an event commonly referred to as The Great Revelation, and are now trying to coexist with humans. This has become possible with the invention of a special drink — the eponymous TruBlood — developed as a safe means to replace human blood.

Public opinions concerning vampire rights vary: some idealize vampires, others scorn them, the rest would rather mind their own business. The anti-vampire movement is also fueled by the fact that vampire blood is extremely addictive to humans and is known on the black market as the drug V. As a result, there exist drainers — people who earn their living hunting down vampires and exploiting them for their blood. Lest you think that Humans Are Bastards, the vampire spokesmen are uniformly corrupt and secretly dine on human blood, as TruBlood tastes revolting — and is overpriced, to boot.

Other supernatural creatures — such as shifters, were-animals, and fairies — also exist. However, their existence is mostly closeted.

The plot mainly follows Sookie Stackhouse (Anna Paquin), a young bar waitress from the small Louisiana town of Bon Temps. Sookie's a telepath, which makes life extremely problematic for her at times.

Her life changes drastically when Sookie meets a vampire for the first time. His name is Bill Compton and he used to live in Bon Temps about a hundred years ago. Sookie discovers that, unlike the thoughts of humans — which are constantly forced on her, requiring effort to shut out — the vampire's mind is a closed book to her, which she finds immensely refreshing. After she saves Bill from a couple of drainers, the two slowly fall in love. However, soon after that a serial killer appears in Bon Temps, targeting all women who sleep with vampires.

True Blood is based on The Sookie Stackhouse Mysteries; each season is loosely based on a single novel. The show differs greatly from the books however, adding a lot of adult content such as graphic violence and explicit sex, as well as a more diverse cast and a quirky, black-comedic atmosphere, in a way, being a Spiritual Successor to Alan Ball's previous series, Six Feet Under. Also, certain story elements are drastically changed from the books, to keep both readers and non-readers constantly wondering what will happen next.

To tie-in with the series IDW published Comic Book series including:

True Blood has examples of:

In what might be his crowning moment of the series, Russell highjacks a live new broadcast, to deliver one of these towards humanity.

In what might be his crowning moment of the series, Russell highjacks a live new broadcast, to deliver one of these towards humanity.