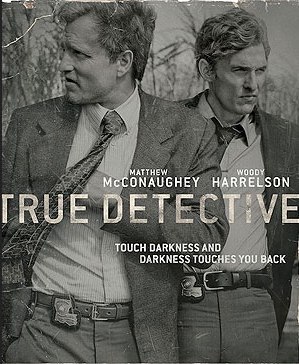 Man is the cruelest animal.
Martin Hart: You think, you wonder, ever, you're a bad man?
Rustin Cohle: No, I don't wonder. Marty. World needs bad men. We keep the other bad men from the door.

True Detective is an American drama series created by Nic Pizzolatto for HBO and shaped like an anthology, with each season focusing on a different case with a different set of detectives.

The first season stars Matthew McConaughey and Woody Harrelson as detectives Rustin Cohle and Martin Hart respectively. Largely using an interview in 2012 as a Framing Device, the story explores the pair's investigations dating back to 1995 into a string of ritualistic murders with occult overtones in rural Louisiana. The first season premiered on January 12, 2014, and was directed by Cary Fukunaga.

The second season follows a larger central cast including Colin Farrell, Taylor Kitsch and Rachel McAdams as law enforcement officers from various departments and Vince Vaughn as a crooked businessman who all become tangled in a web of corruption, depravity and murder in a Southern California industrial town. It premiered on June 21, 2015.

The third season stars Mahershala Ali, Carmen Ejogo, Stephen Dorff and Ray Fisher in a story line about missing children throughout the state of Arkansas. It premiered on January 13, 2019.

Pizzolatto is currently making plans for a potential fourth season.