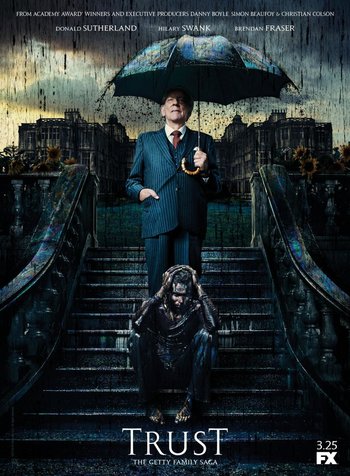 "My grandson! J. Paul Getty, III."
"Mr. Getty's children are a sore disappointment to himself. It would be a sadness if that opinion came to include his grandchildren, as well."
— Bullimore
Advertisement:

Trust is a series airing on FX, created by Danny Boyle and Simon Beaufoy, and starring Donald Sutherland, Brendan Fraser, and Harris Dickinson.

In the wake of George Getty's sudden suicide, J. Paul Getty worries for the future of his empire, as none of his sons have managed to stay clean and sober. When his grandson John Paul III shows up for the funeral, he finally finds someone he believes he can trust with his empire, but then the kid is kidnapped, forcing Paul to deploy his fixer to Rome to find him.