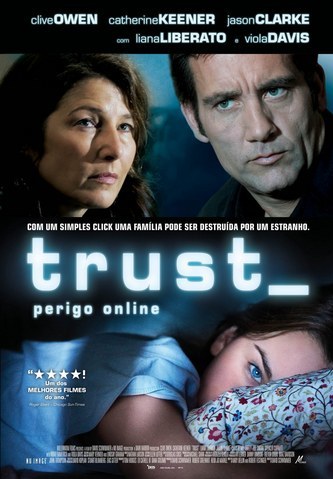 "What took her family years to build, a stranger stole in an instant."
Advertisement:

Trust is a 2011 film about a teenage girl who meets an online predator, starring Clive Owen, Catherine Keener, and Viola Davis, and directed by David Schwimmer (yes, that David Schwimmer).

Annie Cameron (Liana Liberato) is a typical high school freshman from a loving, well-to-do family living in suburban Chicago. For her 14th birthday, her parents buy her a new laptop, which she quickly begins using to chat online with a 16-year-old boy from California named Charlie. At first, Charlie seems like the perfect boyfriend but he soon begins displaying a few quirks, namely the fact that he keeps increasing his age, first to 20, then to 25. However, Annie remains smitten in love with him and soon agrees to meet with him in real life at a mall. When she arrives there, she soon discovers that Charlie was not who presented himself to be...

All of the above only covers the first act of the film, however. The remainder of the movie deals with the fallout of Annie's experience with Charlie and the effect that it has both on her and her friends and family, particularly her relationship with her father Will (Owen).