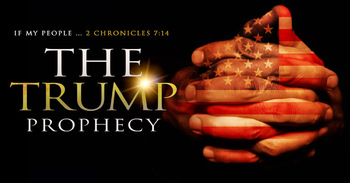 The Trump Prophecy is a 2018 Christian Drama directed by Stephen Schultze, written by Rick Eldridge and Jimmy Hager and is a collaborative effort between ReelWorksStudios and Liberty University's Cinematic Arts program.

Adapted from the book The Trump Prophecies: The Astonishing True Story of the Man Who Saw Tomorrow... and What He Says Is Coming Next, the movie is a retelling of the (alleged) true story of the book's author Mark Taylor (played by Chris Nelson), a firefighter suffering from Post-Traumatic Stress Disorder after he fails to save the life of a young boy. He suffers from recurring nightmares of the event before he begins to have prophetic visions of Donald Trump's presidential campaign in 2016. Seeing this as a sign from God, Mark and his wife Mary (Karen Boles), team up with Mary Colbert (Paulette Todd) to start a prayer movement to help Donald Trump become the next president of the United States of America.

The Trump Prophecy provides examples of: