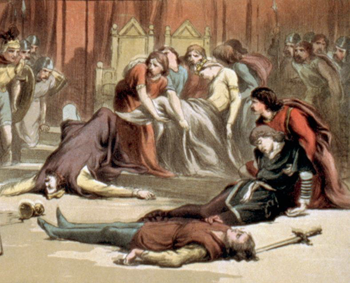 "The rest is silence."
"Oh, somewhere in this favored land the sun is shining bright;
The band is playing somewhere, and somewhere hearts are light,
And somewhere men are laughing, and somewhere children shout;
But there is no joy in Mudville — mighty Casey has struck out."
— "Casey at the Bat" by Ernest Thayer
Advertisement:

Many stories have a happy ending. Sometimes, the characters have to earn it. Sometimes, a random last-minute swerve saves the day. And sometimes, things are kind of dark, but ultimately look like they'll work out.

But sometimes, there is no happiness in the ending. Sometimes, there's a Downer Ending; an ending where the curtain falls on an upsetting, depressing, or bleak scene. While there might be a small bit of light in the darkness, the story has still come to a close with everything in a worse place than where it started. Simply put, it's where a work has an ending that's designed to make the audience sad.

Downer endings have effectively been used to drive home an episode's Aesop. For some issues, it's the only effective way to deliver the message.

Sometimes, a downer ending can conclude the character arcs in a very satisfying way, despite (or because of) being dark, if the characters are Villain Protagonists and people feel that they got what was coming to them. This is not an absolute rule however and there are cases where the audience can have enough sympathy and pity for the characters in question especially if they sympathetic qualities and poignant moments that can lead more into an Alas, Poor Villain perspective, especially when the character in question was once a hero. Other times, it can be overused to the point it feels like a Mandatory Twist Ending. If it comes out of nowhere or is the result of an Ass Pull, then it may be the result of the writers summoning Diabolus ex Machina. If enough people consider it fundamentally unjust, it may acquire the Fanon Discontinuity and Snicket Warning Labels.

"Everybody Dies" Ending, Shoot the Shaggy Dog and The Bad Guy Wins are particularly cruel variations of this. A Prequel may require one, or both; the Happy Ending was Doomed by Canon. It can be resulted into this if the protagonist is doomed since beginning and dies at the end, except when they get a cure or miracle for this.

If the ending mixes elements of happiness and Downer Ending, then it's a Bittersweet Ending. If the whole adventure leading up to it turned out to be meaningless, then it's Shoot the Shaggy Dog. The Cliffhanger is often a Downer Ending, but one implicitly not final; tune in next time to see how they retrieve this one.

See also Gainax Ending, Bolivian Army Ending, Last Breath Bullet, Crapsack World, Yank the Dog's Chain, and It's a Wonderful Failure. Occasionally, part of a Tragedy or an Utsuge. Sometimes a Foregone Conclusion, either because of a historical setting or if the work is a Prequel. The hero may or may not die. Some video games feature this as a Non Standard Game Over. Realization of an Inferred Holocaust may turn even the happiest of "happy endings" into one. Compare Downer Beginning. Contrast Happy Ending.

Note: This is a Spoilered Rotten trope, that means that EVERY SINGLE EXAMPLE listed in the subpages below is a spoiler by default and most of them will be unmarked. This is your last warning, only proceed if you really believe you can handle the subpages.