Down to the Last Play 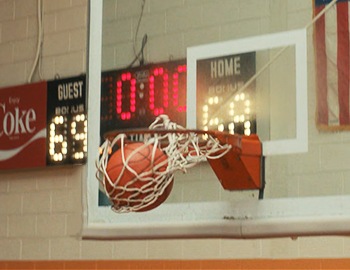 "One minute left, and the scores are tied. Why does that always happen?"
— Frank Shackleford, Chilly Beach
Advertisement:

Almost invariably, sports games as depicted on TV and in the movies are extremely close, go down to the wire, and are decided by a crucial, unbelievable, Million-to-One Chance play at the last second. Usually, the game in which this occurs is the grand finale; the championship or playoff game pitting the ragtag underdogs against the seemingly unbeatable Opposing Sports Team.

Of course, this is not to say that the hero team will necessarily be successful and win the game in this final play. It's become a trope itself to have the final shot miss, the closing field goal go wide right, or that last deep fly ball to die at the warning track in order to present a Downer Ending and teach an Aesop that you can't always win and that it's okay to lose sometimes. (And also note that it doesn't make the example an aversion or subversion of this trope; the game is still decided on the final play, even if not in the protagonists' favor.) In Real Life examples this is even more prominent; close games that come Down to the Last Play are often contested by two evenly-matched teams, both of which are deserving of the win, and thus there isn't a clear protagonist if one is not in either team's fanbase.

This happens because there are very few circumstances in which it is interesting to see a routine pop fly with a four run lead or a second string quarterback sit on the ball for three downs.

Often preceded by the Miracle Rally, and the one player who is involved in the dramatic final play is often the one underdog player who finally gets the chance to prove himself.

A Super-Trope to Who Needs Overtime?note Although ironically, in real life, overtime itself can play out this way. Contrast with Curb-Stomp Battle.

See Just in Time for the non-sport variation of this trope. In politics, this trope is called Decided by One Vote; contrast with Landslide Election. See also Underdogs Never Lose and Misfit Mobilization Moment. When a game itself is structured so that almost every match comes Down to the Last Play, the system enabling this is a Golden Snitch. Very distantly related to Critical Existence Failure, which is about video games where only the last hit point counts as far as staying alive or uninjured.

In Real Life this is much rarer than in fiction, but it does happen.