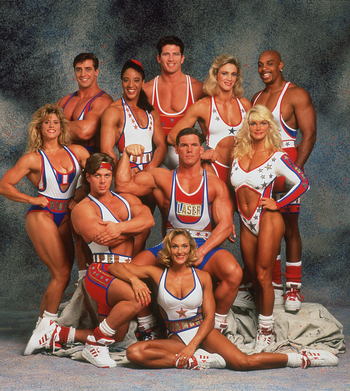 Popular 1989-96 (revived in 2008) athletic competition-slash-Game Show where ordinary Joes and Janes went up against big, mean musclemen and musclewomen. Think The Running Man minus Arnold Schwarzenegger, Richard Dawson, and all the death and gore.

Contenders competed in seven or eight different events meant to test their athletic prowess. The events pitted the contenders in some way against the professional "Gladiators". The contender that scored the most points moved on in the four-round tournament (of which there were two a season), where the winner won a cash prize and came back to face the other half's tournament winner for a bigger cash prize.

Some of the more notable events include:

Originally the Gladiators were to be larger than life characters with fake backstories, but this was dropped from the original pilot and instead they were portrayed as normal ex-jocks with fancy names like Ice, Turbo, Nitro, Sabre, Hawk, Tower, etc. The popularity of the Gladiators helped keep the show going, even as Gladiators themselves left the show with a great deal of regularity over the course of the first couple of seasons. The most popular include Danny Lee Clark (Nitro), Lori Fetrick (Ice) and Lee Reherman (Hawk), the latter of which went onto the most successful career of the Gladiators after the show was cancelled. Also of note was contender Rico Constantino, who would later have a short stint in WWE as...Rico.

Of course, there were the ubiquitous celebrity episodes and special episodes. Season Two of the revival also started with an unofficial Very Special Episode — an amputee competed and, while he made a noble try, it was pitiful in the most literal definition to see him run the Eliminator with triumphant music in the background while it was obvious that he was suffering and his prosthetic simply wasn't designed for this competition.

The original series (which ran until 1996) was aired in First-Run Syndication, and later become popular rerun fodder for The New TNN, and later ESPN Classic. NBC revived the series in 2008 with a considerably bigger budget (and none other than Hulk Hogan as emcee), but essentially the same format and most of the same games. Arthur Smith of Hell's Kitchen fame was shopping another

revival, which he stated would be spandex-free and have more of a Hunger Games influence, stylistically. It never made it out of Development Hell. Seth Rogen, of all people, was stated to have been working with MGM on another revival in 2018, but that too has disappeared without a trace. Currently, reruns of both the 1989 original and the 2008 revival were formally seen on Pluto TV before the channel was pulled.

There was a UK version called simply Gladiators (which also got a short-lived revival) as well as Russian and South African versions and the occasional international crossover.

There was also a children's version called Gladiators 2000, which featured a couple of the adult gladiators appearing on the show to help the kid players.

The 2008 revival provides examples of: