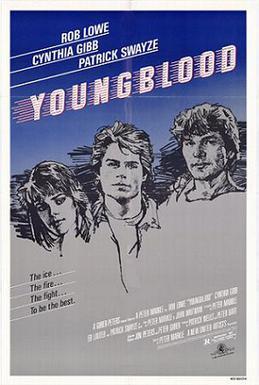 Youngblood is a film directed by Peter Markle.
Advertisement:

Dean Youngblood (Rob Lowe) is a seventeen-year-old farmer's son from New York who wants to play in the National Hockey League. He goes to Canada, where he tries out for and joins the Hamilton Mustangs, a minor league team. Dean is a talented player, but his lack of physical toughness causes him to get bullied by his teammates and beaten up by his opponents. However, he befriends his teammate Derek Sutton (Patrick Swayze) and falls in love with Jessie Chadwick (Cynthia Gibb), the coach's daughter.