Because I Said So 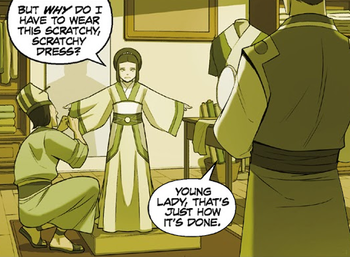 We have to have a caption. That's just the way it is.
"Don't do this, and don't Do that
What are they trying to do?
Make a good boy of you
Do they know where it's at?
Don't criticize, they're old and wise
Do as they tell you to
Don't want the devil to
Come and put out your eyes"
— Supertramp, "School"
Advertisement:

"Because I Said So" is another one of the Parental Issues tropes. It is known by a handful of Stock Phrases:

Essentially, this trope describes adults who believe that simply being the parent grants them the right to rule unquestioned over their child, so there's no need to explain anything to their child.

So, when mothers and fathers see their child about to do (or encounter the child announcing their intention to do) something they believe or know to be a bad idea, their reaction happens like a bad, conditioned reflex. As a result of their belief that they should rule unquestioned, the parent will just say "No!" with increasing emphasis (and increasing ire the more the child questions the mandate).

Mom and Dad's insistence on their unquestioned authority is a type of Parental Obliviousness, leaving them blinded by their disciplinarian attitude, unaware that they've just laid out a beautiful platter of Forbidden Fruit; that the "NO!" without explaining why they are dead set against their child doing the thing the child wants to do, or why they think it is such a terrible idea is what is driving the child's questions.

Consequently, the child often becomes all the more determined to do what has been forbidden, often going to ludicrous lengths to do so. If the child does obey, it's usually with flinging themself on the bed, and possibly cries of:

A particularly smartass child may persist and ask, "Well, why did you say so?"

Most frequently, the parent ends up regretfully confessing that they did the forbidden thing themselves as a child and they only wanted to protect their own children from the same mistake/misfortune.

Other times, the parent just doesn't explain actions that make no sense to the child, and upsets or estranges them. But, the confession ends up about the same: the parent was trying to protect the kid, and it's always with the best intentions. Although, less ideal scenarios may feature varieties of Abusive Parents who use this as a means to dominate their children.

A type of Appeal to Authority. See also Screw the Rules, I Make Them! and My Way or the Highway. When the plot of a story itself seems to be doing this, you have the Theory of Narrative Causality and/or Because Destiny Says So. This saying will often be appealing to the Tautological Templar. An example of Truth in Television.

In "Eternal Sonata," after seeing Polka healing a man with magic, a mother warns her son to never go anywhere near anyone that glows like that. When he asks why, she replies "Because I said so." The real reason, though, is because she believes that the magic illness that Polka carries is contagious. This, however, is a completely false rumor.

In "Eternal Sonata," after seeing Polka healing a man with magic, a mother warns her son to never go anywhere near anyone that glows like that. When he asks why, she replies "Because I said so." The real reason, though, is because she believes that the magic illness that Polka carries is contagious. This, however, is a completely false rumor.