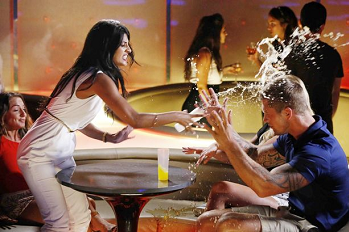 "I'd throw this mocha in your face, but it's not nearly scalding enough."
— Santana, Glee
Advertisement:

Somebody has said or done something that offends someone else. In retaliation, that person will toss a drink at them, pour something over their head or launch a solid piece of food.

Can be considered a Super-Trope to Food Fight, although when done by adults a fight usually won't break out, outside of comedies (or westerns).

The Spiritual Predecessor to Food Shove Gag. Compare Edible Ammunition, Pie in the Face, Tantrum Throwing and Produce Pelting. Edible Bludgeon is the more extreme version of this.

Don't Try This at Home, as in many jurisdictions this can be grounds for assault charges, particularly in the case of scalding liquids such as coffee which can cause severe burns through even brief exposure. Unless it's with a friend and all in good fun, trying this with someone you're already having words with could end far less comically than the fictional examples listed below.

After asking for one too many drinks, Chris gets aggressive over the bartender rationing him and is promptly told to leave.

Example of:
I'll Tell You When I've Had Enough!

After asking for one too many drinks, Chris gets aggressive over the bartender rationing him and is promptly told to leave.