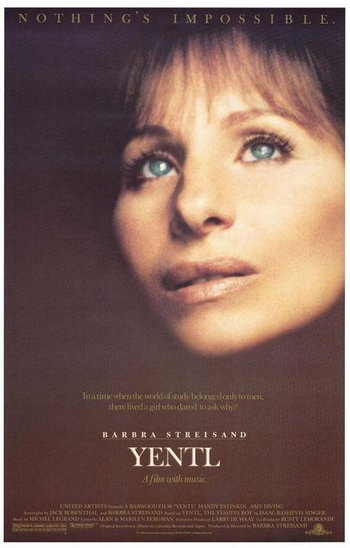 Barbra Streisand directed, co-wrote, co-produced, and starred in this 1983 musical drama film, adapted from a 1975 play of the same name (based in turn off the short story "Yentl the Yeshiva Boy" by Isaac Bashevis Singer), about a Jewish girl in Poland who becomes a Wholesome Crossdresser so she can receive an education. The movie is set in the early 20th Century and was partially filmed in Prague. As the lead character, Streisand got to belt out several memorable songs.
Advertisement:

Yentl secretly is instructed in Talmudic Law by her father, a path that is disallowed to women of the time. When her father dies, Yentl makes the decision to cut her hair, take the name of her dead brother Anshel and disguise herself as a boy so she can enter a yeshiva (Jewish religious school). There she becomes friends with her roommate Avigdor, who is engaged to marry a sweet, gentle, and beautiful woman named Hadass.

Complications arise: One day while many of the men are gone swimming, Yentl realizes she is falling hard for Avigdor and can't act on it without blowing her cover. Then suddenly, Hadass's family breaks off Avigdor's engagement. Avigdor had lied about his brother dying of consumption where in truth his brother had gone insane and committed suicide, and the family feared the sickness might run in the family. Distraught, Avigdor comes up with what he thinks is an excellent idea - as his best friend, Anshel should take his place as the groom, and as a result he won't be cut off from Hadass completely. Yentl balks, but she doesn't want to lose Avigdor (who almost leaves the town in disgrace) and Hadass is a nice enough woman. In the ensuing scenes filled with her terror and a few close calls, she ultimately goes through with the marriage.

Since Hadass is nervous about the arrangement, still attached to Avigdor and and in no more hurry to consummate the marriage than Yentl is, things settle down for a bit. However, when the three of them are together, Yentl watches Avigdor staring longingly at Hadass and starts to realize that he's too deeply attached to her to ever reciprocate what Yentl feels for him. Meanwhile, inspired by Yentl's wit and brains, the innocent Hadass starts to express an interest in academic study, which Yentl, recognizing the thirst, is all too glad to indulge. What she didn't intend was for Hadass to start to love her because of it, and when Hadass starts to come on to her, Yentl realizes she can't keep up the charade. She reveals the truth to Avigdor, who is initially furious, then accepting, and even admits he was hiding some feelings for her too. Avigdor and Hadass get back together and Yentl leaves for America where she might have a chance at pursuing her opportunities more openly.