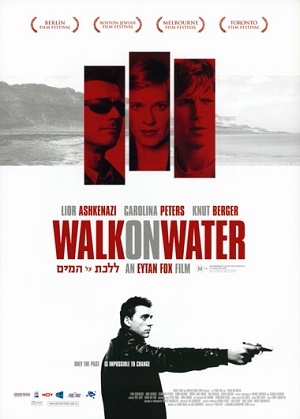 Walk on Water (ללכת על המים, Lalekhet Al HaMayim) is a 2004 Israeli film. It is directed by New York-born Israeli director Eytan Fox and stars Lior Ashkenazi, Knut Berger, and Caroline Peters. The screenplay was written by Gal Uchovsky. Most of the dialogue takes place in English, although there is much in Hebrew and German.

Eyal is a Mossad agent who eliminates enemies of Israel. His wife has recently committed suicide, and he doesn't want to admit that he's suffering of it. His chief Menachem decides that he needs to take on a less challenging assignment: tracking the whereabouts of Alfred Himmelman, an aging Nazi war criminal, and get him "before God does".

In order to find the old man, Eyal poses as a tour guide and befriends Himmelman's adult grandchildren — Axel, a gay social worker, and Pia, who decided to cut all ties with her family due to their support of her grandfather and went to Israel to work in a kibbutz as atonement for her family's past.