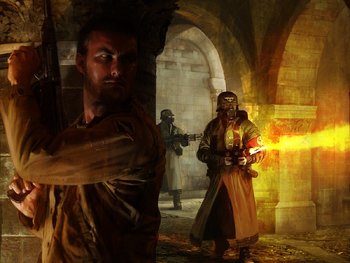 Look at that. It's raining Nazis.
"We're gonna be doing one thing and one thing only... killin' Nazis!"
— Lt. Aldo Raine, Inglourious Basterds
Advertisement:

Someone who dedicates their life to hunting down ex-Nazis, or is dedicated to hunting down one particular Nazi because of what they did in World War II (note: this trope doesn't apply just because the antagonist happens to be an ex-Nazi, it's only for someone who hunts them regularly). Often a Badass Israeli who might be working for Mossad, a result of the high-profile kidnapping of Adolf Eichmann from Argentina in 1960. In reality, Mossad stopped chasing war criminals not long after this event, as more urgent threats to Israel took priority (for example, hostile neighboring Arab regimes are considered bigger threats to Israel than old Nazi war criminals).

Expect the former Nazi to be living somewhere in South America in his well-guarded mansion financed by Nazi Gold, from which he plots the return of the Third Reich. Hardly Truth in Television, as genuine war criminals go to some trouble to avoid drawing attention to themselves. And this usually involves living modestly and often working in low-end jobs such as manual labor. And as far as all that Nazi Gold, there are some other more plausible theories about where it ended up.

On the flip side, a Nazi Hunter must be wary of himself and not develop a Knight Templar tendency. If he hunted Nazis for too long, he himself would become what he hated: A Nazi by Any Other Name.

Something of a Discredited Trope these days, as anyone who served in World War II gets too long in the tooth to be anything other than a Nazi Grandpa. And the generation that would have been old enough to be movers and shakers in the Nazi party would now be super-centenarians.note As of the third decade of the 21st century, even a raw recruit or Hitler Youth member would be no less than a nonagenarian. Finally, the end of the Cold War and the start of The War on Terror dramatically expanded The Usual Adversaries. Occasionally, much more recent works depict the Nazis of the revivalist neo-Nazi variety.

Before he became Magneto, he was a man on a mission to try and kill Klaus Schmidt; the man responsible for killing his mother and torturing him into awakening his Mutation.

Before he became Magneto, he was a man on a mission to try and kill Klaus Schmidt; the man responsible for killing his mother and torturing him into awakening his Mutation.