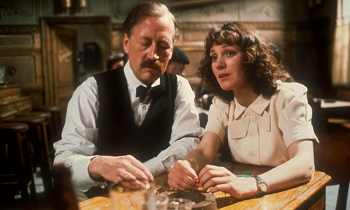 Secret Army is a 1970s drama centred around a World War II Belgian resistance group called Lifeline, operating in and around Brussels, loosely based on the real-life "Comet line"

. It was produced by the same team that made Colditz and features a few actors in common with that series.

Parodied by the sitcom 'Allo 'Allo! so successfully that the sitcom is more well-known than the original. Despite the serious tone and the fact it's played completely straight, if you've seen Allo Allo you'll probably find it impossible to take seriously. There was also Fairly Secret Army, a pseudo-spinoff of The Fall and Rise of Reginald Perrin, which inverted and played with various aspects of the concept.