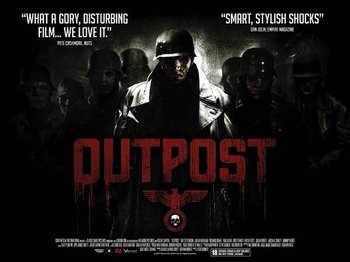 Outpost is a horror movie starring Ray Stevenson and Michael Smiley about a team of mercenaries who are hired to scope out an old World War II bunker in war-torn Eastern Europe at the behest of a mysterious scientist. It soon becomes apparent that the bunker was a secret research facility into reality-bending experiments done by the Nazis... and that the bunker's last garrison might not be as dead as they should be.
Advertisement:

and the Philadelphia Experiment

this is a remarkably polished low-budget horror.

Two more Outpost movies have been made — the direct-to-DVD sequel Outpost: Black Sun and a prequel, Outpost: Rise of the Spetsnaz.

Not to be confused with the Outpost computer games, or the The Outpost TV show.

The 2012 sequel. The electromagnetic field around the Outpost has started to spread, allowing the trapped ghost soldiers to rampage across Eastern Europe. As a secret NATO taskforce engages in a futile battle to stop them, a Nazi Hunter seeking revenge and a physics engineer seeking the Unified Field generator team up with a special forces team trying to get to the Machine to deactivate it.

Advertisement:
Outpost: Rise of the Spetsnaz

The 2013 prequel. Dolokhov is the leader of a Soviet commando unit in World War II. Finding evidence of a Nazi base not marked on any map, he ambushes a convoy approaching the base, but gets captured along with two fellow soldiers and dragged into the Outpost to be used in their experiments. Turns out Those Wacky Nazis don't know who they're dealing with.