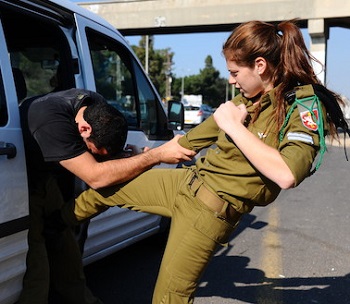 Meddle not in the affairs of a female IDF soldier, for your jewels are weak and easily compromised.
"They're not the 'Oh, let me help you with your taxes' Jews. They're the 'Can you hold my machine gun while I take a leak' Jews. It's a different culture."
— Jon Stewart, The Daily Show
Advertisement:

Israelis are badass. No ifs, ands, or buts. They are a Proud Warrior Nation and it is a national law that each one must have a Moment of Awesome on his Bar Mitzvah or her Bat Mitzvah. The polite softspoken Israeli with glasses is a myth. If one miraculously appears, you can count on him being a Badass Bookworm. If an Israeli is a villain you can count on him being something cool like an Arms Dealer or an assassin. Every female Israeli is an Action Girl Squadette who always looks great in her combat fatigues and beret with her Uzi jauntily slung over her shoulder. Every male Israeli is an Ace Pilot, or a spy for the Mossad (their other intelligence agencies are so secretive, Hollywood hasn't heard of them; and anyway no one can beat that name for coolness). The Israel Defense Forces do not have a single Obstructive Bureaucrat like, oh, every other army in the entire world. It is too much of a Badass Army.

The above is partial Truth in Television, since the IDF maintains a more independent, less regimented mode of operation than many militaries, training their units to think on their feet (sometimes, though, the army does disagree: e.g. the case of Elor Azaria). This, however, also leads to the IDF making mistakes that a more regimented army wouldn't. Oh, and it definitely does have its fair share of Obstructive Bureaucrats (any Israeli can tell you about how horribly inefficient the IDF can be), mostly in the form of disgruntled 19-year-olds.

soft and sweet on the inside, but tough, thorny and nigh impenetrable outside.

Fun Fact: "Israel" literally translates to "wrestles with God", after Jacob did just that, and almost won!

Related to Israelis with Infrared Missiles. Can loosely apply to non-Israeli Jewish characters who are as tough as shoe leather, at least if their Jewishness is played up enough. Can often be Truth in Television too, as evidenced below.