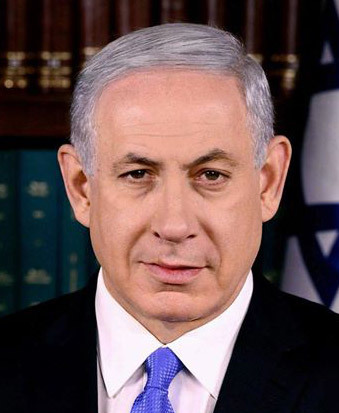 Benjamin "Bibi" Netanyahunote An easy way to tell if someone discussing him is from Israel or outside it is to see how they refer to him; "Netanyahu" is generally used by foreigners, as is customary for most world leaders, while native Israelis would call him Bibi (born 21 October 1949) is the 9th Prime Minister and current Leader of the Opposition of Israel and Chairman of the Likud Party. You might be surprised to learn that he's the first Israel-born Prime Minister since the founding of the state. No, Yitzhak Rabin doesn't count, because he was born in Jerusalem under the British Mandate of Palestine in 1922. The founding of Israel was in 1948. Indeed, until 2021 when Naftali Bennett (born in 1972) became Prime Minister, Bibi was the only Prime Minister who was actually born in the State of Israel; both Ehud Barak and Ehud Olmert were born in the early-to-mid 1940s.

Netanyahu was once a captain in the Sayeret Matkal special forces unit, participating in the War of Attrition and the Yom Kippur War. He fought in the raids along the Suez Canal and led a commando team deep into Syrian territory, where it's rumored that he gained an aptitude for combat. On top of being an accomplished soldier and office, the young Netanyahu was known to be extremely intelligent. He was accepted to the highly prestigious Massachusetts Institute of Technology, where he studied from 1972 to 1976. In that time he took double, sometimes triple course loads, earned a bachelor's and then a master's degree in architecture, earned another master's degree in business management, co-authored a 100-page thesis on the computerization of the newspaper industry in a graduate course at Harvard University, and made good progress on a PhD in political science, all while taking a break in the middle to fly back to Israel in order to serve in the aforementioned Yom Kippur War. He abandoned his PhD and decided to "settle" for his two master's degrees when he got news of his brother's death. His brother was the only IDF fatality in the hostage rescue at Entebbe; quite how much this affects his world view is a matter for debate.

His first - and very much unfavorable - term was from 1996 through 1999; he hired American Republican political operative Arthur Finkelstein to run his campaign. While very much criticized for his adoption of American-style sound bites and attack ads, it proved effective enough that it resulted in his election. In a touch of irony, Ehud Barak used this same method to oust Netanyahu from the position in the 1999 election. Netanyahu briefly retired from politics after he was defeated by Barak in the 1999 elections. His second (2009-2013), third (2013-2015), fourth (2015-2020) and fifth (2020-2021)note yes, only four consecutive terms, despite going through six consecutive elections in 2019, 2013, 2015, March 2019, September 2019, and 2020 - there was no cabinet formed as a result of neither 2019 election, so the Cabinet elected in 2015 is served on a caretaker basis until 2020 terms were marked by austerity, controversial stances regarding Palestine and a hawkish policy against Iran. However, after failing to form a majority coalition, Netanyahu was ousted in June 2021 and succeeded as Prime Minister by Naftali Bennett.

In the wide world, where discussion of Israeli politics mostly focuses on the Arab–Israeli Conflict, Netanyahu's infamous for repeatedly building settlements on Palestinian soil, and justifying his actions by claiming that it's Israeli, not Palestinian, land that he's building settlements on. Whether that's true or not has no place in this wiki, although we can safely say that both the Palestinians and The European Union disagree vehemently, while the US has questioned the wisdom of the move. Another controversy spawned when Netanyahu stated that he would accept a Palestinian state - but only if undivided Jerusalem remains the capital of Israel, the Palestinian do not establish an army and the Palestinians revoke their demand for a right of return.

At home, however, and especially around the end of his fourth and during his fifth term, Bibi is more known for his corruption, womanizing, and attempts to hold onto power and increase his own prestige, including things like doing favors for millionaires in exchange for alcohol and cigars, proposing to abolish the ceremonial Presidency just to prevent the front-runner, his ideological rival Reuven Rivlin, from winning, calling a second election in 2019 to prevent the same Rivlin from appointing his 2019 challenger, Benny Gantz, as Prime Minister, and successfully using the COVID-19 pandemic to coax Gantz's bloc into supporting him - which has the welcome (for him) side effect of making Gantz's centrist party crash and burn in the polls in favor of rightist parties. However, he's hardly the most notorious guy in the Government. His own wife, Sara, is obsessed with her official titles, bullies the PMO's staff into submission, and involves herself a little too much in her Husband's work. His son Yair is often compared to Prince Joffrey. And then there's people like Miri Regev, Oren Hazan or Rafi Peretz...

In 2021 he was ousted by a coalition held together by only one commonality - oust him from power. Unfortunately the coalition has collapsed, PM Naftali Bennett was replaced by Yair Lapid, and Bibi is still in the Knesset (though now in the Opposition) and plotting a return to power in the upcoming election (to be held in November 2022) even as his trial for corruption drags on. Stay tuned.