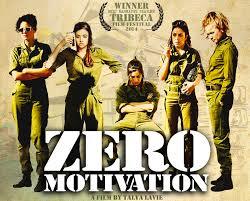 Zero Motivation (originally Éfes beYakhasèy EnóshHebrew אפס ביחסי אנוש, ‘Zero in Human Relations’) is a 2014 Israeli black dramedy film directed by Talya Levie that is her debut movie, starring Dana Ivgy and Nelly Tagar. It depicts the lives of female Israeli soldiers conscripted into the Israeli Defense Forces, and centers on The Slacker Zohar, and her best friend Daffi, who are serving out their two years in the military by holding ridiculously simple and pointless jobs as "Postal NCO" and "Paper and Shredding CEO", respectively. They work alongside grumpy Russian Israeli Irena, Those Two Girls Liat and Livnat, and are bossed around by ambitious careerist Rama.

Divided into three chapters, the first part of the film features Zohar, Daffi, and the other soldiers returning to Shizafon, their (real life) military base in the middle of nowhere. Daffi has been trying for ages to get transferred to the Kirya

, where she hopes life will be less boring and more comfortable. There's also a new recruit, Tehila, who may not be what she claims to be. The second part deals with Zohar’s agony over still being a virgin while everyone around her already isn’t, and her quest to pop her cherry. In the third part, Daffi finishes her officer training and is now in charge of Zohar, a change Zohar does not welcome.

Zero Motivation was the bestselling Israeli film of 2014, was nominated for twelve Ophir Awards and won six, as well as Best Narrative Feature at the Tribeca Film Festival. Lavie also won the Nora Ephron Prize given to female writers and directors.