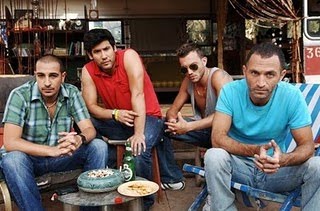 From left to right: Newton, Katsar, Itzik, and Moti, sitting at the Bus Farm.
Get a degree, find a job, make a career—
Find the one, start a family, take a high-interest mortgage—
Go to the gym three times a week, buy a 20,000 shekel bike, take proper care of yourself!—
Chase, achieve, surpass, consume, realise, dress up, plan, finance, make a profit, use, calculate, dance, build, wreck, scheme, develop, quit your job, stand out, break out, succeed—

But why should you? Just live.
—The show’s promo

The series tells the story of Moti Amoyal, a man in his early thirties who decided to ‘quit the rat race’: he lives with his three best friends, Itzik Bensuli, Ra‘anan ‘Katsar’ Avital, and Morley ‘Newton’ Avital, on a little lot Moti inherited from his grandfather, with old unused buses (hence the nickname ‘the Bus Farm’) used as houses and a built-in shower and kitchen and anything they need, in the outskirts of Jerusalem. Moti has a job washing bodies before their funerals and Itzik works at a local garage, while Katsar and Newton get their food from a local soup kitchen.

The trouble starts when Moti is informed by the Jerusalem city hall that he has a debt of 750,321 NIS, due to his late grandfather allowing criminals to use the place as a dumping ground for their waste. He has two months to get the sum, lest the four get evacuated and have nowhere to live.

This just gets more complicated, as it turns out that Moti, in a trip to India he had before the show began, had a passionate romance with an Israeli traveller he found there. Said woman, Shir Ambar, is now back in Israel, and her boyfriend, ‘Amit Peled, trying to impress his father Yaïr into getting his father’s appreciation and a promotion (he works for his father’s insurance company, Peled Insurance), is doing everything in his power to make Moti and his friend fail at getting the money and get the lot for himself, as he finds out the city hall has big building plans for the lot, making it worth millions.

Add to that a Love Triangle with both Moti and ‘Amit trying to get and hold onto Shir, Shir’s best friend friend Yuli Barkai and her quest for love, some shady connections to organised crime, Moti’s complicated relationship with his family, Moti’s sister Sivan trying to get the money for the class trip to Polandnote Israeli sophomore students usually go to Poland to see the ghettos, concentration camps, and whatnot to get a seriously toned down experience of what the Holocaust was like. Students usually raise the money to go themselves, but often help each other out. The trip is quite controversial, partially due to its high costs, as students have to pay extra for keeping all the food kosher, even though many students couldn’t care less about kosher laws. and budding romance with her shady classmate Tavor, mix it all up with the recurring themes of social casting, morality, and faith and you got one of the most critically acclaimed series in Israeli Television ever.