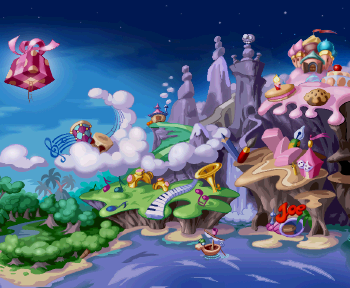 Mmm, topography.
"They had flowery meadows and rainbow skies, and rivers made of chocolate, where the children danced and laughed and played with gumdrop smiles!"
— Sean Penn, Team America: World Police, describing Iraq under Saddam Hussein
Advertisement:

A Sugar Bowl is a setting in a story that is lively and happy and where bad events rarely, if ever, happen. Any place with friendly locals (human or not), idyllic landscapes, rustic yet hygienic towns, and No Poverty is likely a Sugar Bowl.

There is No Antagonist. The villains here are harmless. Sometimes you can have a sweet setting with unexpectedly creepy and/or evil bad guys who may or may not be allergic to anything saccharine, but even in that case, the kind of permanent damage they can do is likely minor. Expect a Heel–Face Turn via Care-Bear Stare and/or Defeat Means Friendship. There might be a character who finds the place Sickeningly Sweet.

They're often intended to be a Utopia, so don't worry about the details.

Be advised that proximity to, prolonged stays within, or merely entering such places may "naturalize" you into a local in body and/or mind.

Compare with: Level Ate, which covers settings that are literally made out of sugar. Contrast with Crapsack World, the Mirror Universe of this trope. Crapsaccharine World appears to be this, but turns out to be Crapsack World. If a Sugar Bowl used to be a Wretched Hive, see Heel–Face Town. Also, Sugar Apocalypse, where bad things happen to good universes. Not to be confused with Sweetness Aversion, which is a reaction. If sufficiently analyzed and contrasted with a more "realistic" world, it can be a tame variant of Eldritch Location.

We have one of these. See the Self-Demonstrating Article for Sugar Bowl for an in-character description made by a visitor.